“I Speak St. Kitts Culture and Heritage” Workshop a Success 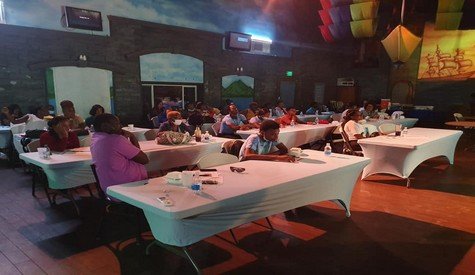 St Kitts and Nevis (WINN): A workshop to improve awareness and appreciation of the Federation’s history and culture, dubbed “I Speak St. Kitts Culture and Heritage” is described as a success by the St. Kitts Sustainable Destination Council.

The two-day event was recently hosted by the Sustainable Development Council and the Ministry of Tourism.

Chairperson of the St. Kitts Sustainable Destination Council, Diannille Taylor-Williams told WINN the workshop attracted many applicants but due to COVID-19 protocols, only 30 people were accommodated.

“One of the things I’m not so proud of, but it speaks for itself, is that we had to turn that people from the sessions, because we were being mindful of being compliant with the COVID regulations … so we couldn’t have too many persons in our session, so we had to limit the number of persons.”

Taylor-Williams said the session next year should facilitate those who were unable to attend this year.

“So this year, having done some research, we got feedback from persons who have participated in the previous “I speak St. Kitts” training on sustainable tourism about what topic they would like to see as the next theme for our training and based on the feedback that we received, culture and heritage was the number one theme… what we were hearing from them is there so many things about the history of St. Kitts and why we do what we do that they do not understand, and sometimes they are asked by their guests or clients questions that they are stumped with; everybody talks about Brimstone Hill, but there are other little simple things right around Basseterre, for example, that people are unaware of and they pass daily.”

The workshop was facilitated by Mr. Leonard Stapleton from Rooted in History. Mr. Stapleton was also the author of the book “Places of Memory” to be incorporated into the teaching of history, local history in schools within the federation explained Taylor-Williams.

Stapleton, a national of St. Kitts and Nevis, is a former geography and social studies teacher and is known as a historian.

The workshop’s three sub-themes were “Music and Dance”, Food and Drink”, and also “Our Homes and Games That We Played”

“And so we had those things that you were experiencing the food and not just hearing about it. He spoke about things like the making of Mauby and sasparilla, and even “Hamon” (locally produced rum that may not be licensed).”

In the final session, participants were encouraged to create an action plan based on what they learned and Taylor-Williams said the council will check the progress of the implementation of these action plans in three to six months.