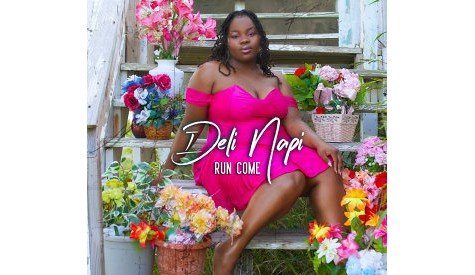 Napi, who was a part of the group Heavenly Kyst in high school and college and now the current lead vocalist for the local cover band KC5 Band, said that it was just time for her to branch off and do her own music.

“I’ve been making music for years, writing my own songs being inspired by things, people, everything around me and I just wanted to have my own stamp, my own rose print.”
Ideli shared with host Kevon Hanley that it’s the weirdest thing to hear her own voice but she is now used to hearing it. In response, Hanley asked if Ideli, in listening to the finished product, found anything that she would change, without hesitation, she said yes.

“But that’s just the perfectionist in me, but… it’s done, I had to let it out. Otherwise, if I needed to perfect it we wouldn’t be here today.”

‘Run Come’ was written by Delrose Wilkinson; produced and mixed by Stephen Richards of Project Reveal; mastered by Azem Bailey with videography by B’jon Bass of Stylejerk Creates.

When speaking about her inspiration for ‘Run Come’, Ideli credits her vulnerability and being able to tap into that emotion.

“Probably from an experience before and even in my own personal experience, ‘Run Come’ is about being vulnerable with you partner and being patient also, because a lot of times one out of the other may be going through some things that they don’t know how to express and sometimes they like to close up and I [am] just saying run come to me… I [will] listen to you like however long it takes I’ll be patient with you… That’s my inspiration behind it just being vulnerable.”

Ideli’s rich, round and full tone adds to the interesting mix of the mid-tempo reggae beat and her soulful vocal runs and harmonies injected within the song. The mix of sound should be no surprise as she describes her sound as being influenced by reggae and soul in her youth by listening to reggae through her father growing up while her mother listened to artists like Whitney Huston and Toni Braxton.

“My inspiration as I got older; I started listening to stuff like Jill Scott and Erykah Badu… Those are the types of artists I listen to and get my inspiration from.”

Ideli describes perfection as her biggest article when it comes to her craft.

“As creatives; even in singing, doing art, photography we all struggle with this kind of perfectionist syndrome that we have to get everything done perfectly. And there is no perfect because as soon as you finish something you get so much experience and lessons from that…”

She also expressed that even if only one person likes her song, that is good enough for her, she has done her job in communicating her art.

Ideli also expressed her appreciation to her team when speaking about the conceptualization of ‘Run Come’.

“Well it all started… sometime in May, Stephen from Project Reveal, so I heard this little clip of it on Instagram and I reached out to him… as soon as I heard it all I was hearing was run come run come… that’s all I had and within two days I made the song… I was so inspired by it.”

Luckily this inspiration occurred during the lockdown caused by the COVID-19 pandemic which left her with enough time to focus solely on the song.

She thanked all those who had a hand in the production of the song and the music video especially her team.

“I can’t go here without saying lots of love and appreciation to my team and that’s B’jon Bass, Sarafina Osborne, and Candace Richards… Without you definitely I wouldn’t even be here and have enough confidence and this push…”.

Ideli reminds us that it is important to have a support system in whatever we do; we must never forget that as humans we need people.

Audiences can look forward to a full project from Ideli as she teased that during the first quarter of 2021 she will be releasing an EP, but for now, ‘Run Come’ is available on all streaming platforms and the music video is available for viewing on YouTube.