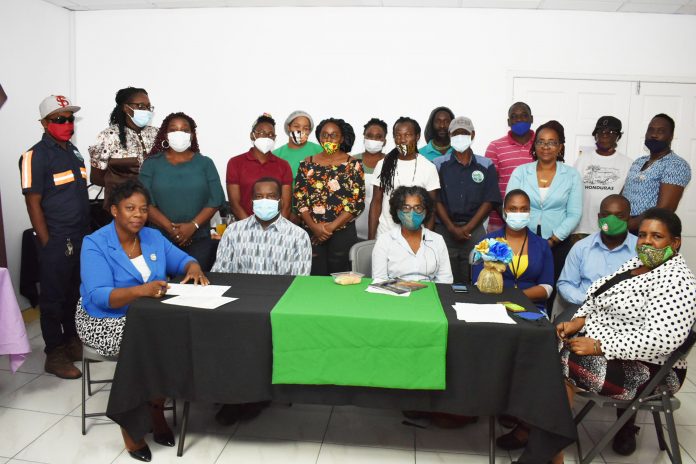 CHARLESTOWN, NEVIS (IICA-SKN) — Twenty backyard farmers on Nevis are the recipients of raised seed beds, Grow Boxes, thanks to the collaboration between the Inter-American Institute for Cooperation on Agriculture (IICA) and the ministries of Health and Gender Affairs, Social Development, and Agriculture in the Nevis Island Administration (NIA).

“This initiative came out the Covid experience, understanding that a lot of people have lost their jobs and to help with food security,” said Technical Specialist, St. Kitts and Nevis IICA Delegation, Ms Sharon Jones, on Thursday November 12 at a ceremony held at the conference room of the Department of Gender in Charlestown to hand over the raised seed beds to backyard farmers drawn from the five parishes in Nevis.

The empowerment of the twenty farmers in Nevis was part of IICA’s response to the Covid-19 pandemic in the Caribbean Community (CARICOM) Region, where the IICA Delegation in St. Kitts and Nevis in collaboration with Federal ministries on St. Kitts and ministries in the Nevis Island Administration launched initiatives aimed at improving food security at the grassroots on the two islands. Farmers on St. Kitts received rabbits and training in rabbit production.

“When I came with the discussion to Mr Randy Elliott, Director at the Department of Agriculture, his first reaction was that he really thought that because of the downturn in the economy in particular with tourism affecting Nevis that backyard farming would be the best impactful intervention,” observed Ms Jones.

“I do think that you are all well-deserved and well pleased to take advantage of the opportunity,” said the St. Kitts and Nevis IICA Delegation official. “I myself have always had a backyard garden when I had my children growing up and it was not only a good place to provide extra food, but it was a good place for interacting with my children.”

According to Ms Jones, the grow boxes will not only provide food for the home and save on the family budget, but will also give the farmers an opportunity to make extra money by selling the foods that they will grow in their raised seed beds. She added that the farmers would also be contributing to the growth of the economy when it gets back on its feet.

“I do thank you (Departments of Gender Affairs, Social Development, and Agriculture in the Nevis Island Administration) for the support and I do look forward to following up this initiative as time goes along and when I do come back, I really want to see that the backyard farming is a strong movement and that you are all making great strides moving forward,” said Ms Jones in her conclusion.

Addressing the participants, Director of Agriculture in the Nevis Island Administration Mr Randy Elliott noted that at the Department they believe that partnership is very important, and the reason they decided that they will not only partner with IICA, but would also partner with the farmers, Gender, and Social Services to execute the project.

He said the twenty boxes that were constructed were funded by IICA and the Ministry of Agriculture valuing close to almost $30,000. He added: “It is no easy task for IICA to seek funding for this project and for the Ministry to put its efforts and its resources behind this project, bearing in mind it is not one of those projects or one of those programmes that were budgeted for in 2020.”

The Director of Agriculture who stated that the 4×16 boxes have a capacity of 64 plants, told the participants: “If you were to plant strictly tomatoes, 64 plants within the space of three months you could pull out maybe about $960 from those boxes. We are pleased to be partnering with the different departments and ministries, and IICA, all along with you the participants.”

No Lighting Up of “Spliff” In Public, Police Warns Cannabis Smokers

Etienne: We Are Failing To Control Coronavirus

No Lighting Up of “Spliff” In Public, Police Warns Cannabis Smokers

Etienne: We Are Failing To Control Coronavirus | WINNFM 98.9

No Lighting Up of “Spliff” In Public, Police Warns Cannabis Smokers | WINNFM 98.9

Etienne: We Are Failing To Control Coronavirus - https://www.winnmediaskn.com/?p=8186

No Lighting Up of "Spliff" In Public, Police Warns Cannabis Smokers - https://www.winnmediaskn.com/?p=8195

The Cable, a telecommunications company on St. Kit

An elderly man was reportedly brutally beaten in t

Permanent Secretary in the Ministry of Foreign Aff

A T-10 Cricket tournament will commence this weeke