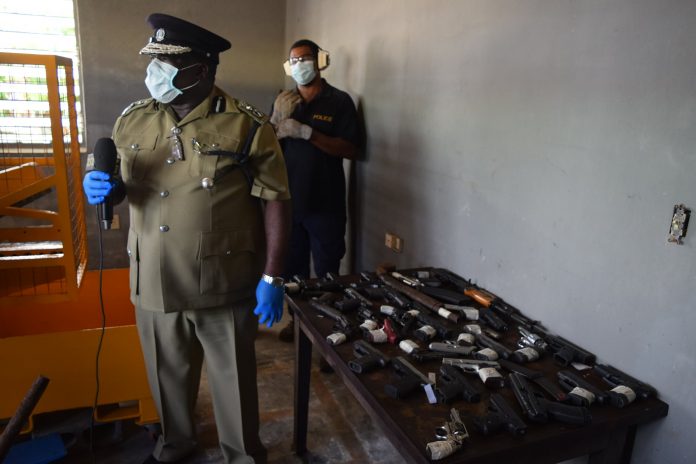 St Kitts and Nevis (WINN): The St. Christopher and Nevis Police Force destroyed 31 illegal firearms that had been collected as part of the Peace Initiative on Monday (September 28) at Camp Springfield.

The illegal arms were a combination of illegal firearms and ammunition voluntarily handed over by gang members through a trusted third party to law enforcement. The firearms were handed over in August 2019 and have just been put to destruction.

It was reported that initially, Police received 30 firearms and 73 rounds of an assortment of ammunition that had been collected between both islands. 22 rounds of ammunition, 13 9mm and 9 .45 caliber rounds were handed over to the Police in Nevis.

In addition to the 30 illegal firearms handed over in recent weeks, 13 guns and assorted ammunition were discovered by members of the security forces during various operations across the country throughout the year. When combined with the 13 illegal firearms taken into custody, a total of forty-three 43 firearms were removed from the streets of communities around the Federation last year.

Head of the Nevis Task Force, Inspector James Stephen, noted that the Interim Strategy for the Reduction in Gang Induced Violence had proven to be successful.

In a statement released by the Police on September 29, since February 2019, members of gangs in the Federation have been a part of a Peace Initiative which has had several significant outcomes. Demonstrative of their level of seriousness to the peace effort, members relieved themselves of their weapons last year. As a result, thirty (30) firearms and ammunition were handed over to the Police. These weapons have been audited by the Forensic Unit and underwent ballistics. Additionally, a firearm that was taken into custody by the Police earlier this year as a part of the same initiative was also destroyed.

Commissioner of Police, Hilroy Brandy was quoted as saying, “…once we [did] our investigations, we promised that all the weapons would be destroyed…you are here to witness that all thirty firearms will be destroyed this afternoon, and to assure you that none of the firearms [are] back on our streets.”

Commissioner Brandy went on to state that he wanted to assure the general public that since the effort of taking these thirty firearms from the street, the police will continue to make sure our streets and our homes are safe from illegal firearms. He reported that the police have taken seven firearms off the streets so far for this year. He added that notwithstanding the global pandemic, Police are still out searching and conducting stop and search exercises in order to apprehend anyone with an illegal firearm.