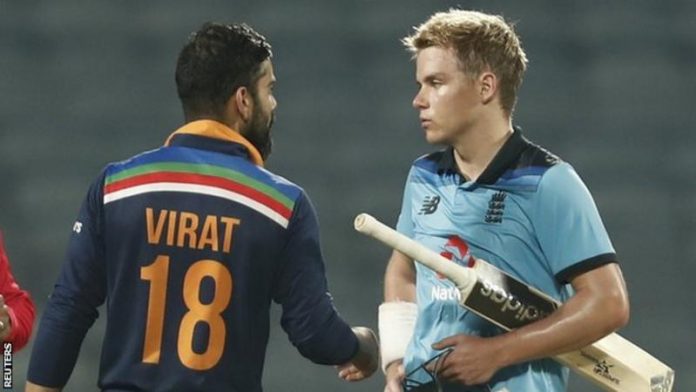 England were beaten in a thrilling one-day series decider against India, despite Sam Curran’s heroic 95 not out.

Chasing 330, England looked beaten at 200-7 in the 31st over, only for Curran to keep them afloat by adding 57 with Adil Rashid and 60 with Mark Wood.

In an incredible five-ball spell from the end of the 48th over, Wood overturned being given out lbw, was dropped, and Curran was also put down.

Fourteen were needed from the final over in Pune. After Wood was run out, last man Reece Topley squeezed the single that left Curran to get 12 from four balls.

As left-arm seamer T Natarajan held his nerve, Curran could find the boundary only once, leaving England seven runs short on 322-9 and India 2-1 series winners.

Wood had earlier played his part in bowling India out for 329, battling the heat to take 3-6 in two overs as the hosts lost their last four wickets for eight runs.

For once, England’s powerful top order failed to ignite the chase, with the tourists slipping to 95-4 against some skilful India pace bowling.

They were revived by Dawid Malan, Liam Livingstone and Moeen Ali, before Curran set up the grandstand finale.

In seven previous one-day internationals, Curran’s highest score was 15.
Here, he was calculated, composed and brave in playing one of the great lower-order knocks, carrying England to the verge of a first ODI series victory in India for 36 years.

In reality, he should not have had the opportunity – he offered a simple chance to long-on on 22 that Hardik Pandya somehow spilled.

Curran targeted the leg side, his only sign of confusion coming when Wood arrived in the 40th over with 73 still required. The 22-year-old did not know whether to protect Wood or allow the number 10 to take the strike.

The indecision saw the required rate climb to more than 10 an over, only for Curran to take 18 from Shardul Thakur in the 47th to leave the game on a knife-edge.

What followed was barely believable. First Wood overturned being given out lbw to Bhuvneshwar Kumar from the final ball of the 48th over, then, from the next ball he faced, skied a chance to mid-wicket that Thakur inexplicably shelled.

Incredibly, Curran sent the next ball high into the night sky, with a diving Natarajan dropping a very hard chance on the boundary behind the wicketkeeper.

When Wood turned for a second run at the beginning of the final over, he was sent back too late to make his ground.

Topley did his part, but there was little Curran could do in the face of Natarajan’s yorkers. That Curran equalled Chris Woakes’ record for the highest score by a batsman coming in at eight or lower in an ODI will be scant consolation.

India squeeze home
India remain number two in the world ODI rankings, just behind England
There was little to foreshadow the drama to come as India slowly took hold of a contest played on a superb pitch and in the baking heat.

With the bat, they ditched their measured approach in favour of aggression throughout. Shikhar Dhawan carved through the off side for his 67. Rishabh Pant swiped to mid-wicket and down the ground for 78 and Hardik displayed his power in 64 from 44 balls. Pant and Pandya’s stand of 99 came in only 11.4 overs.

Their total could have been much greater had it not been for two slumps. First 3-18 in 19 balls to spinners Rashid and Moeen, then the late slide that left 10 deliveries unused.

The target was less than England chased with impunity two days ago, but the tourists spluttered when faced with the trickery of Bhuvneshwar and Thakur, leaving the middle and lower order to attempt a rescue act.

Malan was stylish for 50, adding 60 with Livingstone, before Thakur removed both in consecutive overs.

Moeen falling for 29 seemed to be the end of England’s hopes, yet that was to discount the spirited Curran, who almost pulled off an audacious heist.

High praise for Curran – what they said

England captain Jos Buttler: “Both sides made some mistakes throughout the game and both sides played some brilliant cricket. It made for a great game. We’re indebted to unbelievable innings from Sam Curran to nearly get us over the line.”

India captain Virat Kohli: “When the top two teams battle each other you get exciting games, that was what happened tonight. Sam played a really good inning to keep them in the hunt. Our bowlers kept taking wickets at the right periods.”

England’s Sam Curran: “Obviously the main thing, in the end, was we didn’t win the game but I am really happy with the way I played. It was a great experience for me. I haven’t done something like that for while.

“I had messages from the dugout to take the majority of the balls. I tried that but fair play to Natarajan. At the end he nailed his six deliveries. It is a massive learning curve. I will take a lot from it but I am a little disappointed.”