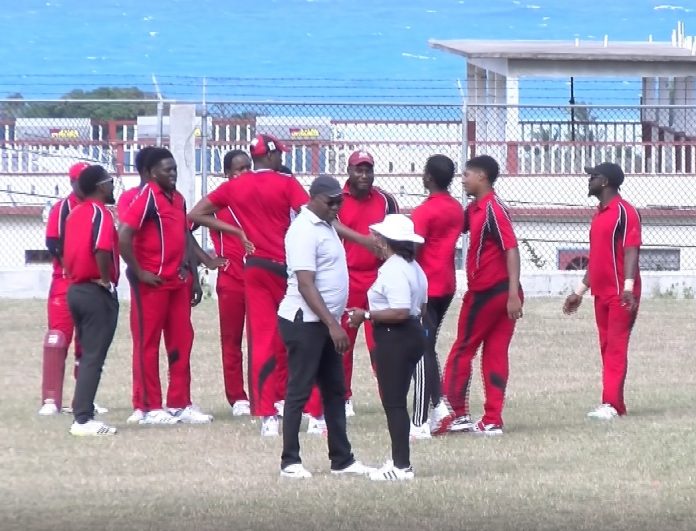 St. Kitts-Nevis (Sports Page) – The Empire Cricket team has now established itself as THE TEAM TO BEAT, on Nevis.

Having won the Nevis Cricket Association sponsored T-20 tournament and then completing victory in the T-10 tournament, hosted by the New Vision Togetherness club, the Empire men placed yet another feather in their caps, on Sunday, 31st January.

On that day, they engaged the undisputed champions of over 35’s Cricket, in the Leeward Islands—The Nevis over 35’s team.

This match was not played for a trophy, but merely for bragging rights.

The two champion teams showed up really early at the VOJN grounds and Skipper Merlin Liburd for the Nevis over 35’s, won the toss and elected to bat first, on what started out as a very lively track.

It was obvious that the Empire men were playing this game ‘for keeps,’ as their opening bowlers went hard at Carlon Smithen and Curtis Morton Sr, with a couple of early snorters.

Morton dragged on one from Reon Solomon, after hitting one four and then the crowd was well and truly entertained, as Carlon Smithen counterattacked in robust fashion.

One back foot punch over long off, from a snorter delivered by Nelson Boland, left the spectators in awe.

After he was caught, the Nevis senior team wobbled a bit in the middle order, but former Leewards wicketkeeper batsman, Joel Simmonds, played a superb hand, to be not out on 60 at the end of the 20 overs, to lead his team to a respectable total of 140.

He was aided by a stodgy knock from Captain Merlin Liburd.

The Empire men however, were up to the task at hand and openers Javia Liburd and Jelani Manners played some superlative shots, all around the ground and again the crowd was well and truly entertained.

In the end, it was a comfortable victory for the Empire team, as they overhauled the target for the loss of the wicket of Jelani Manners, in 15.3 overs.