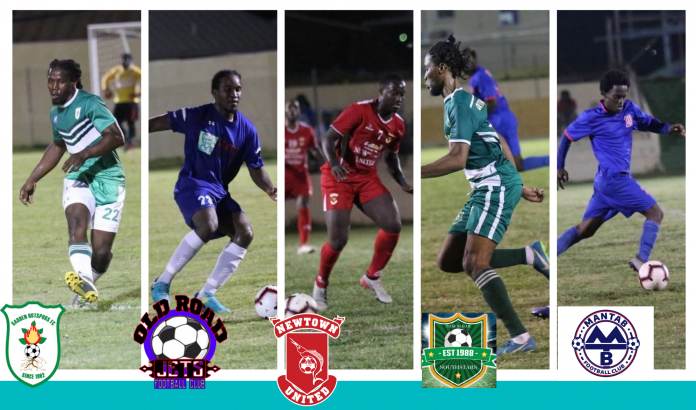 It was real showdown in the SKNFA Premier League Tuesday evening as the race for the
playoffs heat up. S-Krave Newtown United, needing a win to put themselves in pole position to qualify for the playoffs and who were favorites to defeat Trafalgar Southstars, who were looking to seal their safety in the Premier League, failed to deliver and had to come from behind and settle for a 2-2 draw. Southstars got off to a very early start when Ronaldo Nisbett scored in the second minute. Twenty-five minutes later, Dylon Morton doubled the lead putting Newtown in serious trouble. But Ian “Rumpy” Lake came to the rescue again for Newtown scoring both goals in the 24th and 78th minutes.

After the match players from both teams rued the missed opportunity to take command of
their destiny. In the case of Southstars, it was a missed opportunity to seal their Premier League safety, despite the fact that they are still ahead on points to their closest rival Mantab. For Newtown, it will be an uphill battle and they are probably hoping results in the Old Road/Spurs match on Thursday end in a draw.

In the night’s other match:

Tuesday night’s results are crucial to the playoff race and relegation battle. The first five playoff qualifications are confirmed: Village, St. Pauls, Conaree, Cayon and St. Peters. Despite being in 6 th place, Spurs are not a shoo-in for the final playoff spot as they share the same 30 points with Old Road in 7th and Newtown in 8th, but with a superior goal difference of +2. Coincidentally, Old Road and Spurs play on Thursday at 6pm. The winner for that match is in pole position to make the playoffs. Newtown will hope for a draw in that match and then a victory in their last match against Mantab on Friday. Mantab on the other hand, with their victory Tuesday against relegation-bound Elco Ltd.

Security Forces F.C. will have to defeat Newtown to get the much needed 12 points to stay up in the Premier League. Southstars are in pole position with11 points, but failure to hold on to their 2-0 lead and defeat Newtown mean they have to hope for a draw on Friday between Mantab and Newtown in order to secure their Premier League safety. Whether it is the playoffs or the relegation fight; it will be down to the very last match of the regular season.