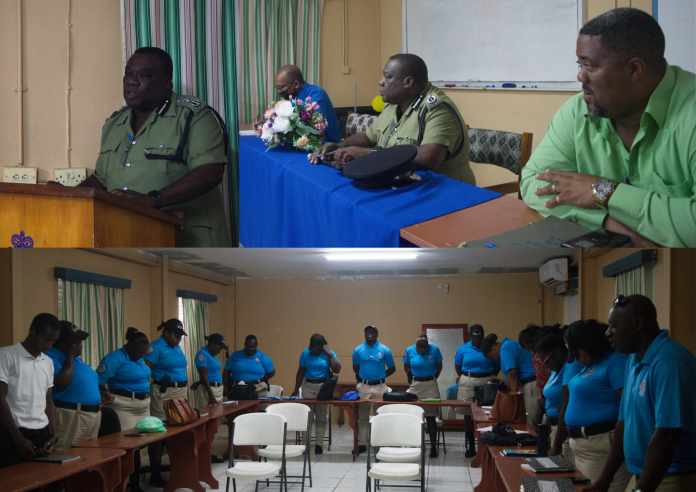 Basseterre, St. Kitts, October 21, 2022 (RSCNPF): In preparation for the upcoming tourist season Island Constables are currently participating in a refresher course to ensure they are on top of their game for what is expected to be a busy period.

At the start of the course, Commissioner of Police Hilroy Brandy asked the Island Constables to always give of their best as this would be the first tourist season for the country without COVID-19 travel restrictions.

“The Tourism department has already announced that they are having a bumper season this year…So I want you all to go out and look smart. We have a new Tourism Minister and she expects big things from you, don’t disappoint her. Show her that you are capable and you can do a good job, so with these few words I want to thank you for serving…,” Commissioner Brandy encouraged.

Force Personnel Officer, Clifford Govia, reminded the Island Constables of the importance of their roles. He said that the course would cover areas such as traffic matters, ethics in law, customer service, theory and practice in the area of evidence and malicious damage among other topics.

Supervisor for the Island Constables in the Tourist Patrol Unit, Alex Marshall, was also present at the start of the course. The course, which began on October 19, 2022, runs for about two weeks and will be facilitated largely by the instructors at the training school. Presentations by officials from the Ministry of Tourism are also expected to be made. The Constables were part of a similar refresher course in 2020 and ongoing training is a critical part of the initiative. They are posted in Tourist Prescribed Areas such as the Independence Square, Brimstone Hill, the War Memorial, etc.