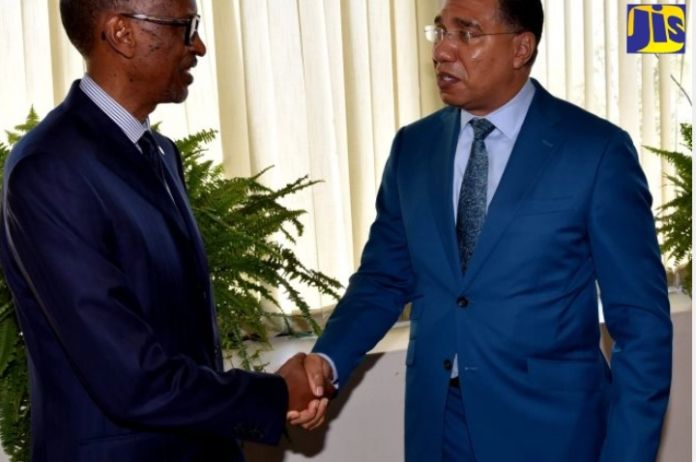 “We believe with the signing of these MOUs, the relations between our two countries will be strengthened and advanced,” Prime Minister Andrew Holness said.

Holness held bilateral talks with Kagame and told reporters “it is my great hope that the bilateral engagements stemming from this visit will demonstrate the commitment of both our countries to closer collaboration “As we seek to strengthen our friendship, we also note the importance of engagement on topics of global concern in regional and multilateral fora.”
Holness described his bilateral talks with Kagame as “critical on various issues of mutual interest.

“The robust dialogue we had builds on the areas of expertise within our respective countries, allowed us to share experiences and best practices and brought us closer by exploring avenues for expanding economic and technical cooperation.

“In so doing we concur that we must now strive to yield concrete benefits from these collaborations between Jamaica and Rwanda,” Holness said, adding that during their deliberations “we spoke of the potential for investments in agriculture, special economic zones, manufacturing and logistics to name just a few areas.

“There have been additional commitments to further explore cooperation in culture, health, youth engagement, energy and tourism which we are assured will yield great benefits for both our countries,” Holness said.

Holness told the ceremony that deepening relations with Africa has always been an area of focus for his administration and the Jamaica-Rwanda relationship “should therefore be seen within the greater framework of our historical connection not only with the continent but with Rwanda since the establishment of diplomatic relations in November 1998”.

He said the two governments leaders were able to exchange views on the CARICOM-Africa relationship “and are both of the opinion that this is a vehicle for greater collaboration even as we anticipate the end of the 2015-2024 International Decade for People of African Descent being celebrated under the theme Recognition, Justice and Development and building on the first CARICOM African summit held in September 2021”.

Kagame told the ceremony that his discussions with Holness were |”productive” and that both men had agreed “that there is no better time for Rwanda and Jamaica to deepen our relationship” as he too welcomed the signing of the two MOUs.

“We should also work together on the global stage to advocate for policies of particular relevance to our people and climate change mitigation is …an example.

“The wheel does not need to be re-invented, Mr. Prime Minister. We are already members of key international organisations such as the Commonwealth and the Organisation of African, Pacific and Caribbean States and we can leverage these platforms for mutual benefit.

“When the will to work together is strong even distance cannot separate us or slow us down,” said Kagame, who left here for Barbados as part of his Caribbean visit.