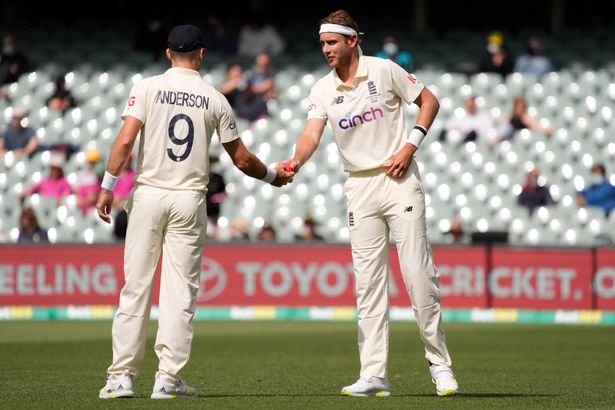 (The Mirror) – James Anderson and Stuart Broad have been recalled by England for the first Test of a new era under head coach Brendon McCullum and captain Ben Stokes.

The pair were controversially axed by England following the Ashes, but both Stokes and new Managing Director of England Men’s Cricket Rob Key were keen for the pair to return. And with the likes of Jofra Archer, Mark Wood, Chris Woakes, Olly Stone, Saqib Mahmood and Matt Fisher all out injured, Anderson and Broad may once again lead England’s bowling attack when they face New Zealand at Lord’s on June 2.

Craig Overton has retained his place in the squad, while Ollie Robinson was not considered on fitness grounds after being limited to just two appearances for Sussex due to a serious tooth abscess and food poisoning. Uncapped Durham seamer Matty Potts has also been included after picking up 35 wickets at 18.57 in the County Championship so far this season.

Potts’ Durham teammate Alex Lees has once again been given a chance at the top of the order, having struck two centuries already for his county. He is set to open with Zak Crawley, who has also retained his place despite averaging just 19.50 for Kent this season.

Dan Lawrence has missed out despite some impressive performances at four against the West Indies as he has recently been sidelined with a hamstring problem. Ollie Pope is also in the squad and could bat at three after Stokes confirmed former skipper Joe Root will move back down to four, while the in-form Harry Brook has been handed his first call-up.

Jack Leach has been preferred over Matt Parkinson as the sole spin option, while Ben Foakes has retained his place as wicketkeeper after an impressive start to the season for Surrey. Jonny Bairstow, meanwhile, is also included after notching hundreds against both Australia and the West Indies, despite not playing a single first-class game since March due to the IPL.

England have resisted the temptation to make wholesale changes, with Potts and Brook the only uncapped players included the squad, but the makeup of the side which faces New Zealand next month will certainly be interesting given Root is moving down to four and Stokes is moving down to six.