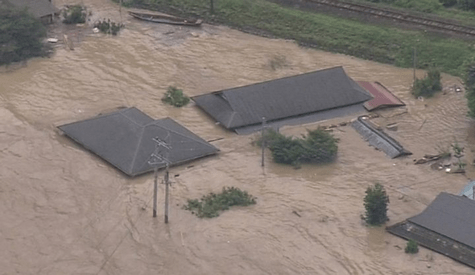 TOKYO (Reuters) – Torrential rain hit Japan’s southwestern island of Kyushu on Monday, with at least one more river bursting its banks, as the death toll from three days of floods and mudslides rose to 44, including 14 at an old people’s home.

Evacuation orders were issued for more than half a million island residents, as well as evacuation advisories for tens of thousands more in western Japan, broadcaster NHK said.

TV pictures showed streets turned into rivers rushing by at waist high, a collapsed bridge, upturned cars and a helicopter winching a man to safety from an inundated house.

The old people’s home was flooded in the island’s central prefecture of Kumamoto. NHK did not give details.