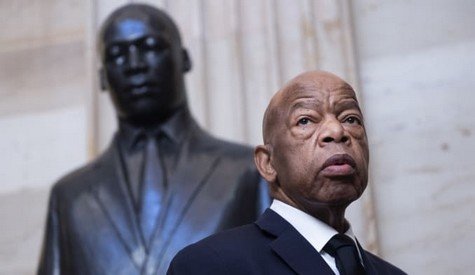 WASHINGTON (Reuters) – John Lewis, who died on Friday at age 80, was a hero of the U.S. civil rights movement of the 1960s who endured beatings by white police and mobs and played an outsized role in American politics for 60 years.

Lewis, an Alabama sharecropper’s son elected in 1986 as a Democrat to the U.S. House of Representatives from Georgia, died after a battle with pancreatic cancer.

A protege of civil rights icon Martin Luther King Jr., Lewis led sit-ins to integrate all-white lunch counters, was one of the original “Freedom Riders” who integrated buses, and suffered a skull fracture while demonstrating for Black voting rights in a savage beating by a nightstick-wielding white Alabama state trooper during an incident now called “Bloody Sunday.”

Lewis was just 18 when he first met King and went on to play a vital role in the civil rights movement that strove for equality for Blacks in an America grappling with racial bigotry and segregation, particularly in the South.