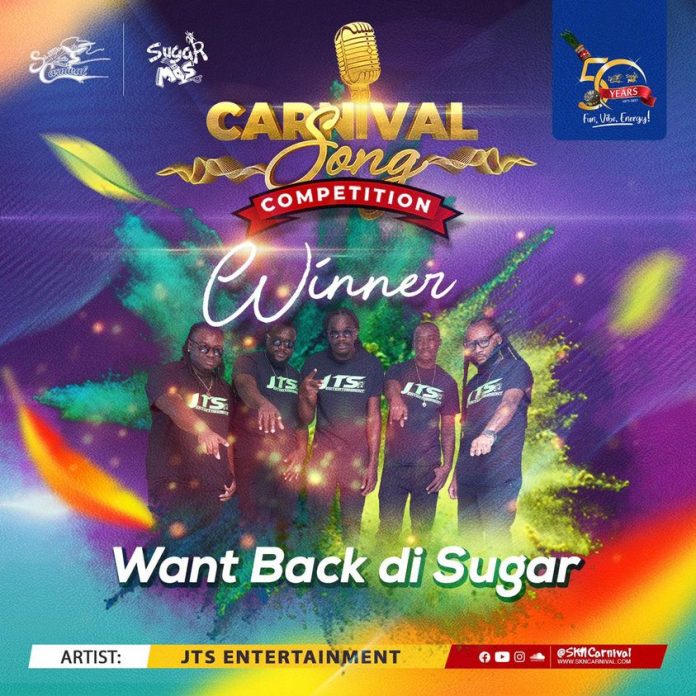 St. Kitts and Nevis (WINN): JTS Entertainment is the winner of the first-of-its-kind Carnival Song Competition viewed by a virtual audience on Friday, October 22, 2021.

With a total of 403 points, JTS Entertainment secured the top spot with their piece “Bring Back Di Sugar” and walked away with a cash prize of EC$5,000.

According to the St. Kitts Nevis National Carnival Committee, their song will be used to promote the golden anniversary of St. Kitts and Nevis’ Carnival and the victory comes just one day after the release of their carnival EP, “Why Not”.

“The song captures the feeling of most Kittitians and Nevisians, who have been yearning for a return of major carnival activities, which, since 2020, have been curtailed because of the ongoing COVID-19 pandemic,” the Carnival Committee said.

The other five finalists were Blade, Genesis, KO, Jeezy Sparta, and De Awesome Navigator. They were presented with cheques for EC $1,000 handed over by Minister of Culture, Jonel Powell.

After the competition was launched in July this year, it attracted eleven entries. Following the eliminations, held on October 04, six artists were selected for the finals. Those not making the cut for Friday night’s competition were Jazzique Chiverton, Lucin Joseph, Xoliq-Vidonje Richardson, Bernado Phipps, and Kyle Roberts.

JTS Ent. was founded on March 31, 2021, by a group of talented musicians & artists with more than 15 years in the music industry. The members are Veshawn “Jazzbo” Bolus and Toriano “Tobap” Samuel as vocalists; Stickle Bennet as producer and keyboardist; Miguel Steven as the drummer; and Steadroy Brooks as bass guitarist.