St. Kitts and Nevis (WINN): Junior Minister of Health on Nevis, Hazel Brandy-Williams, says the setbacks at the Alexandra Hospital Expansion Project, are for “all the good reasons”.

The Health Minister justified the delayed project, which broke ground more than four years ago on May 31, 2017, by saying the Nevis Island Administration (NIA) wants to ensure the hospital can stand up for more than five decades.

“Inasmuch as it has been a little delayed, it has been delayed for all the good reasons. And the good reasons are that we want to have the utility of this facility for the next fifty or sixty years,” said Brandy-Williams while speaking during the October 05 sitting of the Nevis Island Assembly. 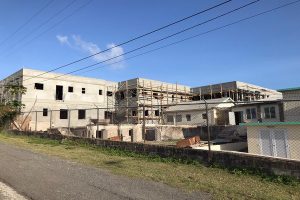 The Junior Health Minister said the NIA has been in consultation with the Pan American Health Organization who has been providing guidance for the expansion works ongoing at the island’s hospital.

In April of this year, Premier and Senior Minister of Health Mark Brantley disclosed that the NIA had selected some consultants who came to reconfigure the interior “and that is necessary because hospitals are a unique type of building…”.

Minister Brandy-Williams said “the consultants were on Nevis last week[Sep. 26 – Oct. 02] and they came to ensure that the internal workflow of the hospital is spot-on. They have made their final adjustments, and we are now waiting on the final bit of plan for the internal flow.

This would not only include the layout but the AC unit and gas unit. All these moving parts have to be in tandem before they can finalize the layout of the internal workflow of the hospital.”

The contractors for the project are Clive Evelyn and Edrick “Wedge” Pemberton, while the project manager is Billy Claxton. They are expected to recommence their work by mid-October, the Junior Health Minister said.