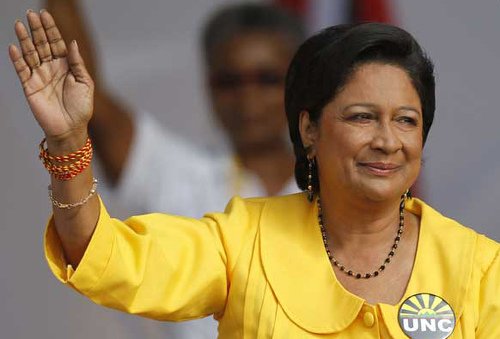 (Trinidad Guardian) Incumbent United National Congress (UNC) leader Kamla Persad- Bissessar last night claimed victory in the UNC’s internal polls, saying there was a clear trend that her Star slate was going to win when the official results come in.

Her leadership challenger Vasant Bharath conceded shortly after she spoke saying, “Members of United National Congress have voted in the National Executive election, and the Lotus Team accepts their decision. We congratulate the Star Team of candidates, led by incumbent Mrs Kamla Persad-Bissessar, and wish them all success during their term of office.

We offer to be of assistance in the urgent and extensive exercise of rebuilding and renewing the UNC. “

Bharath however strongly slammed a number of irregularities which he claimed occurred in the election.

Persad-Bissessar spoke around 9.30 pm last night when the majority of votes coming in from polling stations around T&T showed her slate was ahead of Bharath’s Team Lotus slate.