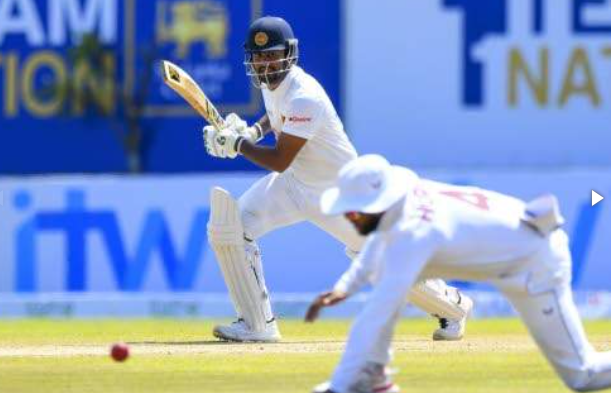 GALLE, Sri Lanka (CMC) — Captain Dimuth Karunaratne’s 13th Test hundred and third in as many Tests put the squeeze on West Indies as Sri Lanka flourished on day one of the opening Test here yesterday.

Choosing to bat first, the hosts ended on 267 for three with the left-handed Karunaratne unbeaten on 132, his fourth hundred of the calendar year and fourth at Galle International Stadium.

His opening partner Pathum Nissanka emerged from an uncertain start, especially against the pace of Shannon Gabriel, to chip in with 56 while Dhananjaya de Silva also carved out an unbeaten 56 as West Indies were kept wicketless in the final hour.

Off-spinning all-rounder Roston Chase, one of five spinners employed on a dry surface, proved the touring side’s most effective bowler with two for 42 — both wickets coming in the first 45 minutes after tea in West Indies’ best period of an otherwise frustrating day.

“I think the pitch is a good batting pitch, pretty batting-friendly. There’s not much there for the fast bowlers,” Chase said following play.

“The ball was spinning a bit early on with a bit of the moisture [which] the wicket had, but I thought after lunch the pitch really flattened out.”

West Indies were made to pay for Vice-Captain Jermaine Blackwood’s crucial miss at first slip on the stroke of the first hour, when he put down a sharp chance that would have accounted for Karunaratne on 14.

Clearly troubled by Rahkeem Cornwall who was introduced in the morning’s sixth over, Karunaratne tried to break the shackles in the off-spinner’s fourth over by steering to third man, but succeeded only in edging to slip where Blackwood’s one-handed grab proved futile.

Karunaratne made the most of the opportunity, striking 13 fours off 265 deliveries and, more importantly, anchoring crucial stands of 130 for the first wicket with Dhananjaya and 97 for the fourth wicket unbroken.
Sri Lanka reached lunch on 61 without loss with Karunaratne on 32 and the right-handed Nissanka, who sustained a few blows to the body from Gabriel, unbeaten on 25.

And Karunaratne posted his half-century in the first hour following the resumption while Nissanka reached his landmark in the third over after the drinks break, but lasted only another six deliveries before driving at Gabriel and edging to Cornwall at first slip.

He faced 140 deliveries in just under three and a half hours and counted seven fours.

Any hopes West Indies entertained of making further inroads were scuppered as Karunaratne and Oshada Fernando (3) carried Sri Lank to tea without further loss on 161 for one.

However, Chase lifted their hopes in the first over after the break when he claimed Fernando to a catch at short leg off the third delivery, Nkrumah Bonner snaffling the offering on the second attempt.

And Chase struck again, with only six runs added at 170 for three, when former Captain Angelo Matthews recklessly holed out to Jason Holder at midwicket for three.

With West Indies having regained a foothold in the contest, Karunaratne and Dhananjaya then snuffed out any momentum the visitors scented, the pair dominating the remainder of the session to put Sri Lanka in the ascendancy.

Unbeaten at tea on 89, Karunaratne reached triple figures in the third over before the final drinks break when he clipped Gabriel behind square for a couple.

Dhananjaya, meanwhile, hit five fours in a knock lasting 77 balls up to that point, reaching his half-century in the fifth over before the close, as West Indies’ decision to take the second new ball in the 81st over paid little dividends.

The day was marred by injury to debutant Jeremy Solozano who took a blow to the helmet just before lunch while fielding close in.