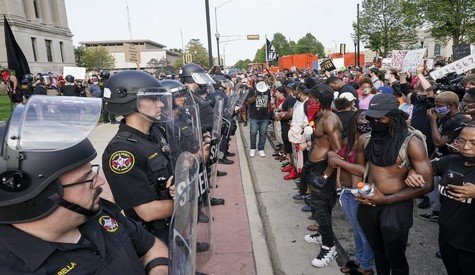 KENOSHA, Wis. (AP) — Anger over the shooting of a Black man by police spilled into the streets of Kenosha for a second night Monday, with police again firing tear gas at hundreds of protesters who defied a curfew, threw bottles and shot fireworks at law enforcement guarding the courthouse.

The southeastern Wisconsin city became the nation’s latest flashpoint in a summer of racial unrest after cellphone footage of police shooting Jacob Blake — apparently in the back, as he leaned into his SUV while his three children sat in the vehicle — circulated widely on social media Sunday. The 29-year-old was hospitalized in serious condition.

The shooting drew condemnation from Democratic Gov. Tony Evers, who also called out 125 members of the National Guard on Monday after protesters set cars on fire, smashed windows and clashed with officers in riot gear the previous night.

Police first fired tear gas Monday about 30 minutes after the 8 p.m. curfew took effect to disperse protesters who chanted, “No justice, no peace” as they confronted a line of officers who wore protective gear and stood shoulder-to-shoulder in front of the courthouse entrance. But hundreds of people stuck around, screaming at police and lighting fires, including to a garbage truck near the courthouse.