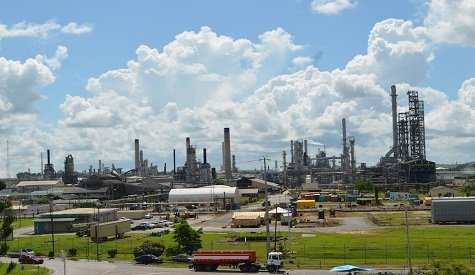 (Trinidad Guardian) The Oilfields Workers’ Trade Union (OWTU) has not shown it has the ability to raise the US$500 million required to purchase the Petrotrin Point-a-Pierre refinery and as a result, the Government is proceeding to immediately return to the open market to seek suitable parties interested in operating the facility.

Energy Minister Franklin Khan made the disclosure yesterday during a joint news conference with Finance Minister Colm Imbert, in which Imbert insisted that after a year of negotiations the OWTU simply could not meet the financial requirements of the deal.

The Finance Minister insisted that the lien (a right to keep possession of property belonging to another person until a debt owed by that person is discharged) was not the problem, although OWTU president Ancel Roget yesterday insisted to Guardian Media that this was at the heart of the challenges.

To understand the issue better, one has to remember that the Petrotrin refinery was heavily leveraged with significant debt. When the Government decided to close down the refinery, it had to come to agreements with the bondholders, who owned part of the debt of the former Petrotrin.