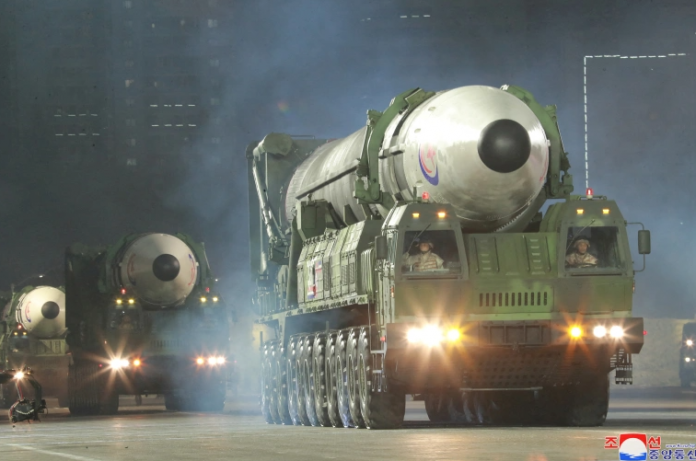 (Al Jazeera) North Korea held a military parade in Pyongyang to mark the founding of its army – a notable national holiday – as leader Kim Jong Un vowed to step up the development of banned nuclear weapons.

“We will continue to take steps to strengthen and develop our nation’s nuclear capabilities at the fastest pace,” Kim said, according to a transcript published by the official Korean Central News Agency, as he promised to continue strengthening the country’s nuclear forces “quantitatively and qualitatively”.

The North’s nuclear weapons were “a symbol of national power” and should be diversified, he added.

“In preparation for the turbulent political and military situation and all kinds of crises in the future… we will further increase our nuclear force at the highest possible speed.”

NK News, a US-based outlet, noted that the capital’s main Kim Il Sung Square had been busy and roads closed, while illuminated objects were seen in the air above the city at night. The parade ended with a fireworks display after about 90 minutes, it said.

Pictures released by state media showed mass battalions of soldiers marching across Kim Il Sung Square, some in combat uniforms and others mounted on horses, with Kim watching from a balcony in a white ceremonial coat with epaulettes and gold buttons.

Kim added that while the primary role of the country’s nuclear weapons was as a deterrent, they could be deployed if North Korea’s “fundamental interests” were attacked.