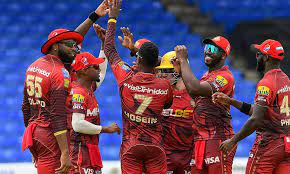 The Amazon Warriors won the toss and opted to field first and they produced a disciplined performance with the ball that kept the Knight Riders in check throughout.

Led by Tabraiz Shamsi’s 4/36, wickets were taken at regular intervals to ensure that no batter ever felt comfortable at the crease as the Knight Riders reached 150/8.

Needing 151 to win the Amazon Warriors got off to the worst possible start losing Paul Sterling for a duck and three wickets in total in the power play.

Shimron Hetmyer and Colin Ingram briefly threatened to take the game away from the Knight Riders but when Andre Russell removed Hetmyer the collapse began and the remaining Amazon Warriors batters fell for just 26 runs.

Earlier on the Knight Riders had constructed their best total of the Hero CPL campaign courtesy of a well compiled 42 from Colin Munro. Overcoming the early loss of Tion Webster and Nicholas Pooran, Munro combined with Tim Siefert to compile a 51-run partnership that set a foundation for some late order risk taking.

Sunil Narine, Kieron Pollard and Ravi Rampaul hit a combined five sixes to help the Knight Riders set a total of 150 runs that always appeared as if it would be tricky to chase.

This proved to be the case in the Amazon Warrior reply. No batter was able to face more than 20 deliveries and despite reaching 81/4 in the 10th over. The Amazon Warriors lost their remaining six wickets for 43 runs to succumb to a heavy defeat.

The returning Akeal Hosein proved to be crucial in the Knight Riders bowling attack taking 3/36 and he was ably supported by the parsimonious Andre Russell (3/16) and Sunil Narine (2/9).