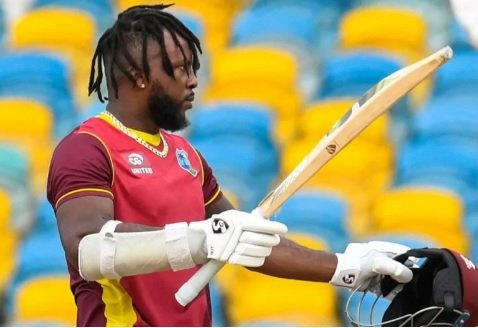 (ESPNcricinfo) – Four batters posted half centuries as New Zealand overhauled the West Indies’ total of 301 for 8 to win the third ODI on Sunday by five wickets and clinch the series 2-1.

Tom Latham scored 69 and put on 120 for the fourth wicket with Daryl Mitchell (63) in a stand which paced the run chase and carried New Zealand in sight of victory.

Martin Guptill (57) and Devon Conway (56) had earlier combined to add 82 runs for the second wicket to give New Zealand a platform for a demanding chase.

Mitchell was out with the score on 248 in the 42nd over and Latham at 259 in the 44th, with New Zealand still requiring 43 runs. Jimmy Neesham settled the issue with a decisive innings of 34 from 11 deliveries, taking 18 runs from the 45th over bowled by Yannic Cariah.

Neesham hit a six from the bowling of West Indies captain Nicholas Pooran to end the chase with 17 balls remaining.

Earlier, Mayers and Hope stayed together for almost 35 overs to shape the West Indies innings. Their partnership ended when Hope was out for 51 off 100 balls and, as often happens with large partnerships, Mayers was out two balls later and without addition to the total. Brandon King fell soon afterwards with the score at 181 for 3 in a sudden reversal for the West Indies.

But Pooran picked up the pace again, posting a half-century from 33 balls. He had hit nine sixes and four fours from 55 balls when he was out in the 49th over.