Labour at 90: Reflects on the past, looks to the future 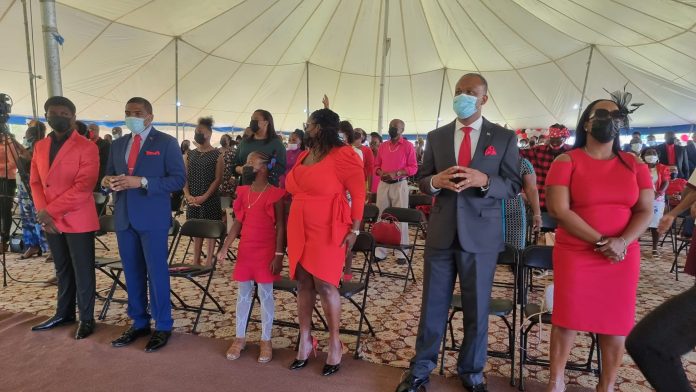 St. Kitts and Nevis (WINN): The executive and comrades of the St. Kitts- Nevis Labour Party joined Pastor Cyprian Williams and congregants at the New Birth Gospel Tabernacle Church in Cayon, on Sunday, January 23 to mark a historic moment, not just for the party, but in the Federation of St. Kitts and Nevis and the English speaking Caribbean.

Party Leader, Dr. Terrence Drew whilst addressing the audience at the 90th anniversary service, recalled the historic past that helped to shape St.Kitts and Nevis today.

“January 25 1932 marks the turning point when after almost one hundred years of struggle since emancipation from the brutal and inhumane slave system, that the working people of St. Kitts and Nevis finally got their breakthrough. They finally got their breakthrough with the formation of a new body that combined a genuine concern for the welfare of the working class, with the middle-class objectives of representative government and introduction of the elective principle.”

Drew continued, “It was on that day in January 1932, that a downtrodden and oppressed people recognized that their power to transform their circumstances lay in each other. In their ability to organise together, to march together, to fight together, informed by an unwavering commitment to serving their fellow countrymen ‘For the good that they can do’.

The Party leader also paid homage to 20 stalwart freedom fighters of the St.Kitts -Nevis Labour Party; including founding members of the Workers League who have transitioned and invited the congregation to observe a moment of silence to honour their lives. He also recognised the former long standing party leader, former Prime Minister and present Leader of the Opposition, The Right Honourable Dr. Denzil L Douglas, all of whom, “paved a pathway towards the creation of a better nation and a better world for future generations.”

In addition, Dr. Drew highlighted some of the major achievements of the St.Kitts-Nevis Labour Party in its 90 year history.

” It was the St. Kitts-Nevis Labour Party and the Labour Movement, in our 90-year journey, that brought to our people worker’s rights such as the 40-hour work week, increased minimum wages; Social Security and severance pay; political rights and freedoms such as adult suffrage for both men and women, affordable housing through the Central Housing Corporation, now the National Housing Corporation, universal free education from primary to secondary level; quality health care and health services; affordable access to tertiary education and other institutions of people’s empowerment through institutions like the St. Kitts-Nevis-Anguilla National Bank, the Development Bank and a rebranded Citizenship by Investment Programme and the Sugar Industry Diversification Fund (SIDF).”