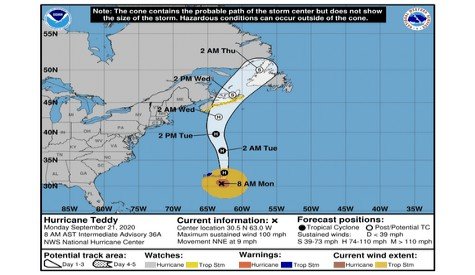 HAMILTON, Bermuda (CMC) — Bermuda was preparing for the passage of a “large Hurricane Teddy” on Monday with the government announcing the closure of schools, businesses, the airport and urging people to take the storm seriously.

The Miami-based National Hurricane Center (NHC) said that Teddy, which is 165 miles southeast of the British Overseas Territory, is moving towards the north near nine miles per hour (mph).

“Although some fluctuations in heading are likely, the hurricane is expected to move generally northward through Tuesday evening, followed by a turn towards the northeast on Wednesday. The centre of Teddy will pass east of Bermuda today and then approach Nova Scotia late Tuesday or early Wednesday,” the NHC said.

It said maximum sustained winds are near 100 mph with higher gusts.

“Little change in strength is expected during the next day or so. Gradual weakening is forecast to begin mid-week, but the cyclone is expected to remain a large and powerful hurricane Tuesday, then become a strong post-tropical cyclone when it nears Nova Scotia by Wednesday morning.”

“I urge everyone to complete your storm preparations… and to remain off the roads until the closest point of arrival has passed and the all clear has been given.

“I cannot emphasise enough that no one should go into the waters during this storm. The current high surf conditions and the conditions today and tomorrow are dangerous and life-threatening to swimmers, and as such there will be no lifeguards on duty,” Ming said.

The director of the Bermuda Weather Service (BWS), Mark Guishard, said “waves and swell are produced by winds blowing across the surface of the water and can build to extreme heights in a hurricane,” adding that the storm surge measured at the Bermuda Institute of Ocean Sciences was about six inches above the normal tide yesterday afternoon.

“High tide is coincident with the closest point of approach, so we can expect storm surge of one to two feet, and waves outside the reef reaching 20 to 30 feet.”

It said tropical storm conditions are expected to affect Bermuda into Monday night and large swells generated by Teddy are affecting Bermuda, the Lesser Antilles, the Greater Antilles, the Bahamas, the east coast of the United States, and Atlantic Canada.

“These swells are likely to cause life-threatening surf and rip current conditions,” the NHC said, adding that from Tuesday through Thursday, Teddy is expected to produce rainfall accumulations of two to four inches with isolated totals of six inches across sections of Atlantic Canada.