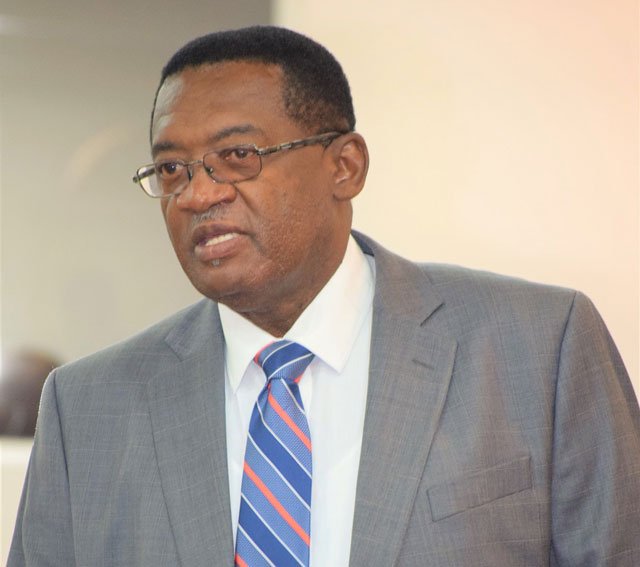 The first night of the series featured Parliamentary Representative for Constituency eight, the Hon Eugene Hamilton.

The first question asked of Hamilton was, how did Cayon become so predominantly supportive of the People’s Action Movement? In his response, Hamilton shared a bit of history.

“Cayon is one of those areas that has been over the years, like most areas, supportive of the Labour Party. Somewhere in the late 1970’s however, as opposed to the 60’s and [early] 70’s, there were things happening in the country that caused persons to begin to change their minds. For us, for example, in the 1960’s, we got an opportunity for us to go to highschool – 1976, 1968, it opened up our eyes; and then of course there were persons such as Sidney Morris who came back with a Master’s Degree and we felt that he was being frustrated. There was a sort of frustration for the people in the community of Cayon and it all ended up being something that galvanised support against what was happening in the government first and then for the next party that was vying to be in power.”

Hamilton added that a lot of young people may not know that Cayon was once a Labour stronghold; and informed that the numbers from 1980 to present shows that there has been no other Candidate that has amassed the number of votes than that of a PAM Candidate.

Minister Hamilton has been the Parliamentary representative for Constituency eight for the past 12 years. Having won his seat in the 2010, 2015 and 2020 general elections.

Another interesting question asked of the Minister was, “As the elected representative for Constituency number eight, do you feel that you have achieved for the constituents, all that you have envisioned?”

Hamilton replied, “Wow, what a question! Listen, every politician, every Parliamentary representative [tries] to get as much as they can and more for their constituents. So it is never really enough, but in the seven years that I’ve been there, we have achieved a lot. Can we look for much more? I am looking for more; but, in those seven years for example, I boasted the other day for the 126 homes in my constituency, that’s a significant number. I believe if you check the record, that has never been achieved anywhere else. In St. Peters in particular, we have had 68 homes, affected by what we have been doing at the NHC (National Housing Corporation), so it is a significant number.”

In addition, the Minister said, “I have been able to work on all those playing fields for all those young people; even naming for example, the one in St. Peters after the great Atiba Harris. In Cayon, we have lighting facilities, you can play sports in the night. In fact we’ve had football played out there in the night and it’s one of the achievements that I have to highlight because the truth is, the only other place in the country before Cayon, I think Sandy Point and now Tabernacle that got lightning was Basseterre; and that Basseterre Lighting Project in the park, wasn’t done under the People’s Action Movement.”

Minister Hamilton, informed that a number of constituents are furthering their education abroad, in countries such as Taiwan. He said getting young people educated and taking advantage of scholarship programmes was one of the things that he was able to get done.

WINN Media on Tuesday morning (March 1, 2022) engaged in a brief dialogue with Mr. Azard Gumbs, one of the hosts of the “Keeping the Promise” Facebook Live Series, who noted that the virtual series will take listeners and viewers on a journey to the People’s Action Movement National Convention.

The People’s Action Movement National Convention is slated for March 13, 2022 at the St Mary’s Park in Cayon.