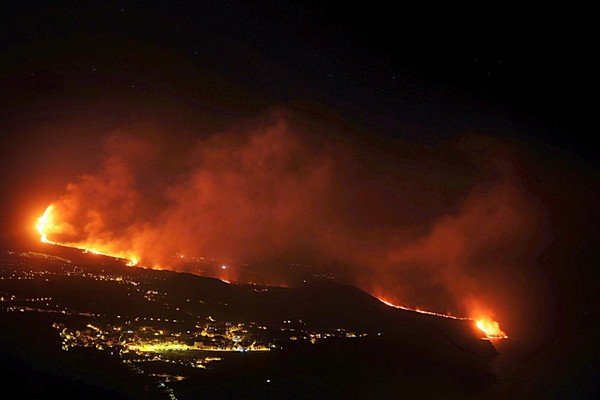 LOS LLANOS DE ARIDANE, Canary Islands (AP) — A bright red river of lava from the volcano on Spain’s La Palma island finally tumbled over a cliff and into the Atlantic Ocean, setting off huge plumes of steam and possibly toxic gases that required local residents outside the evacuation zone to remain indoors on Wednesday.

The immediate area had been evacuated for several days as authorities waited over a week for the lava that began erupting Sept. 19 to traverse the 6.5 kilometers (4 miles) to the island’s edge. On the way down from the Cumbre Vieja volcanic ridge, the flows have consumed at least 656 buildings, mostly homes that turned out to be in its unstoppable march to the sea.

The meeting of molten rock and seawater finally came at 11 p.m. on Tuesday. By daybreak, a widening promontory of newborn land could be seen forming under plumes of steam rising high into the area.