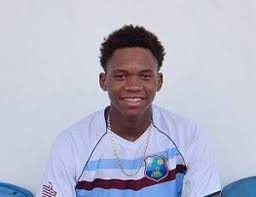 Sports Page – There were several shifts and turns and the pendulum swung from one team to the next.

However, with 70 needed from 35 balls, it looked for all intents and purposes that the Barbados Pride had the game, all but wrapped up.

He proceeded to tear into the otherwise economical Chemar Holder, to take an emphatic 22 runs from his 9th over and suddenly the Leewards Hurricanes’ hopes were revived.

This, as action continued at the Coolidge grounds on Wednesday 10th February, as Barbados Pride engaged the Leewards Hurricanes, in the WICB hosted super 50 cup.

The Barbados Pride batted first and on the back of impressive half centuries from Shamarh Brookes and Jonathan Carter, raced to an imposing 301 for 8 in their allotted 50 overs.

Nevisian openers, Kieran and Ross Powell, got the Hurricanes off to a solid start, before both gifted their wickets, with Kieran Powell unfortunately run out.

Keacy Carty and Nitish Kumar then joined in a match saving partnership, before Kumar went, needlessly attempting a reverse sweep.

It seemed to be all left up to young Carty, but the run rate was overwhelming. At one point, the Leewards needed all of 14 runs per over.

That over when Hayden Walsh Jr, literally went berserk, was the game changer.

Even though he perished in the next over, Terrance Ward was able to stay with the super hero Carty to take the Leewards home in the final over.