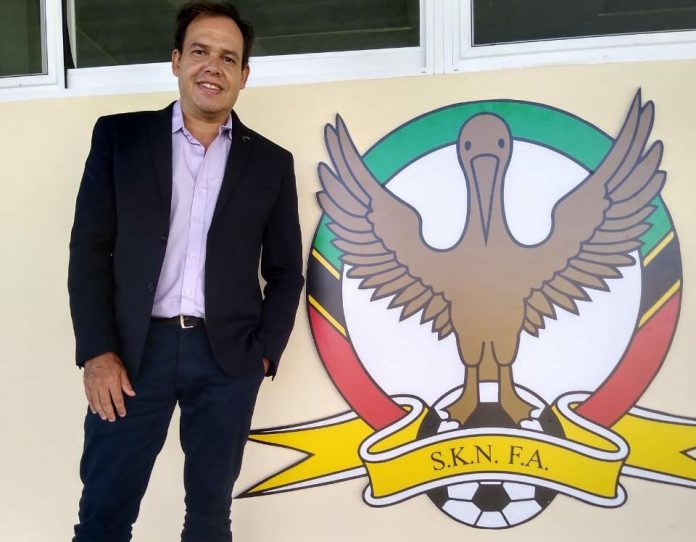 (SKNFA) The St. Kitts and Nevis Football Association (SKNFA) on Tuesday unveiled the new coach of the Senior Men’s National Team—Leonardo Neiva from Brazil. Coach Neiva has a CBF / CONMEBOL / FIFA Pro License and has a wealth of experience having coached in Asia, South America the Caribbean and Africa. He recently worked in Asia where he managed the Thai Honda Ladkrabang FC in Thailand Premier League after great work done for his second spell at Yadanarbon FC of Myanmar.

In North America he coached Montego Bay United FC in the Jamaica Premier League and
contributed to the team winning the title in the 2015/2016 season. Coach Neiva said he is excited about coaching the Sugar Boyz. “I think anything is possible in football. I hope we can qualify ourselves to the next stage, next phase (of World Cup qualifiers),” he said.

“We need to give our players the conditions to play. They need to play more to get the
experience…that is why we think we will do a very great job here,” he added.

Coach Neiva spoke of the positive attributes of the St. Kitts Nevis Senior Men’s Team. For one he believes the team is blessed with great local talent. “It’s a really big challenge for me as a coach. It’s a nice opportunity…I hope we can do a very good job here,” he said, adding that he has already been analyzing match video from past senior team matches and studying the players.

Meanwhile, he said he has gotten great support from the St. Kitts and Nevis Football Association (SKNFA) on and off the field. “It’s been a great support. Yesterday we met, we spoke about a lot of things and I am very grateful because they support me a lot (on and off) the field,” Neiva said.

For the last 11 years, Coach Neiva has been studying and improving his football skills and
knowledge by taking recognized coach license courses in different countries. In 2007 he attended the coach license in Brazil, at Brazil Football Coach Association, and then joined several football clubs.

Later in 2017, aiming at an international experience, Neiva obtained the CONMEBOL A
License from the Brazilian Football Confederation (CBF) in Brazil. In 2019 coach Leonardo
Neiva finalized the Pro License Course, which is the highest coaching certification available to date.