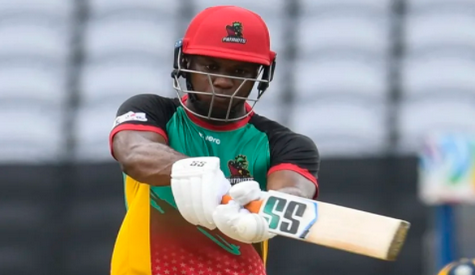 PORT OF SPAIN, Trinidad (CMC) — Evin Lewis dazzled with a 14th Hero Caribbean Premier League (CPL) half-century but it was Australian Ben Dunk who emerged the hero, slamming successive sixes off teenaged seamer Nyeem Young in the final over to earn St Kitts and Nevis Patriots their first points with a dramatic six-wicket victory over Barbados Tridents here yesterday.

Chasing 152 in the first match of the tournament staged at Queen’s Park Oval, Patriots looked favourites throughout the run chase thanks to the left-handed Lewis’s superb 89 off 60 deliveries.

When he holed out on the ropes at long off in the penultimate over, however, Patriots still required 20 from eight deliveries and the momentum instantly shifted back to Tridents.

Inexplicably saddled with the burden of the last over in his first match of the tournament, Young conceded a wide off the first ball and a dot ball off the next delivery but then watched as Dunk smashed back-to-back sixes on either side of the wicket, to get Patriots over the line with three balls to spare.

The left-handed Dunk finished unbeaten on 22 off 11 balls with a four and two sixes, his innings helping to deal the reigning champions their third defeat in four matches in what has been a less than stellar start to their title defence.

Tridents had only themselves to blame after being sent in, producing yet another haphazard batting effort to post 151 for seven off their 20 overs.

They were going nowhere at 79 for four in the 14th over until New Zealander Corey Anderson stepped up to stroke a 19-ball 31 and galvanise the innings.

Not for the first time, opener Shai Hope batted slowly and his 29 needed 30 deliveries while Ashley Nurse chipped in with 25 from 17 balls and opener Johnson Charles, a run-a-ball 24.

For the second-straight game, Johnson and Hope staged a half-century stand with exactly 50 off 45 balls for the first wicket.

However, once Charles was hit in front by off-spinner Jon-Russ Jaggesar (2-17), Tridents declined quickly, losing four wickets for 29 runs in the space of 32 deliveries.

The left-handed Anderson, with scores of 0, 2 and 2 in his previous innings, then clobbered three sixes in a 56-run, fifth-wicket stand with Nurse to ensure Tridents made a recovery of sorts.

Patriots stumbled at the start of their run chase when Australian Chris Lynn (16) and Joshua DaSilva (1) both fell cheaply but Lewis then treated all to a masterclass that formed the foundation of a 78-run, third-wicket stand with Denesh Ramdin (20).

Lewis belted two fours and nine sixes — three of which came in succession at the start of the ninth over from leg-spinner Hayden Walsh and raised his fifty off 28 balls.

He lost Ramdin in the 17th over to a catch in the deep off medium pacer Kyle Mayers before too perishing in Mayers’s next over, with the result still in the balance, but Dunk arrived to put on the finishing touches.