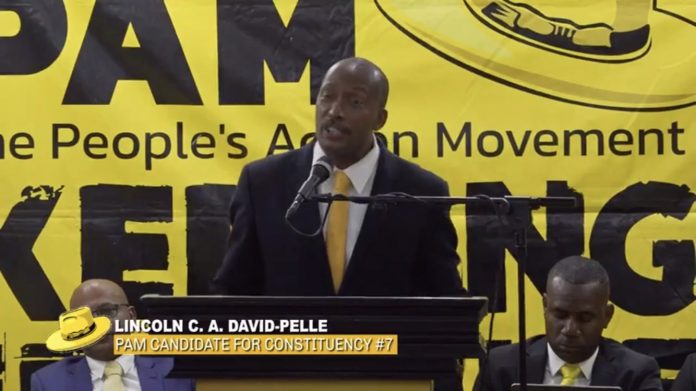 St Kitts and Nevis (WINN): The People’s Action Movement (PAM) has now launched a full slate of candidates, as the party prepares for the upcoming St Kitts-Nevis General Elections.

On Friday night (June 17) PAM introduced Mr. Lincoln David-Pelle, a former police officer in the Royal St. Christopher and Nevis Police Force as the party’s candidate in Constituency No. 7.

Mr. Lincoln David-Pelle is from Lodge Village in Constituency No. 7. He is the father of two children and the brother of 5 siblings, including 1 sister and his identical twin brother, Superintendent, Mr. Lyndon David of The Royal St. Christopher and Nevis Police Force. David-Pelle has several certificates in the areas of discipline, sports, administration and leadership. He is known as an expert in Martial Arts.

In addition, Mr. David Pelle obtained a Master’s Degree in Security-Risk Management from the University of Leicester in the United Kingdom.

Leader of the People’s Action Movement, Shawn K Richards introduced Mr. Pelle to the general public, describing him as an honourable man that is above reproach.

Richards revealed that, during a party gathering last Thursday night (June 9) in Half Way Tree, a number of people were being engaged about candidacy for Constituency No. 7. According to Richards, it was on that night that Mr. Pelle expressed his desire to serve the people of St. Kitts and Nevis, to provide better representation to the country.

Mr. Lincoln David-Pelle will be contesting the Constituency No. 7 seat against the Prime Minister of St. Kitts and Nevis and leader of the Peoples Labour Party – Dr. Timothy Harris as well as Mr. Leon Natta Nelson of the St. Kitts-Nevis Labour Party.