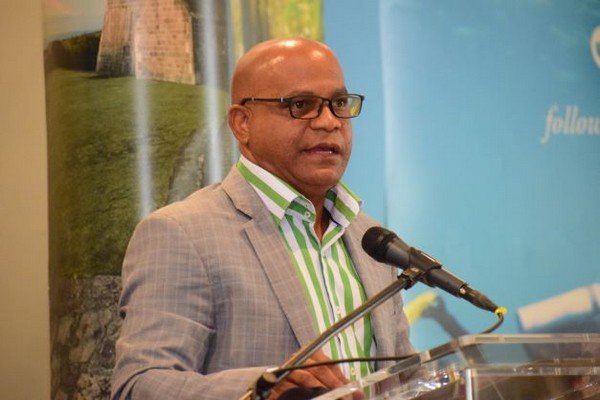 Grant on Saturday, June 4 said the St Christopher Air and Seaports Authority has made significant achievements so far for the year, despite the negative effects of COVID-19.

“Firstly, let us look at SCASPA’s financial performance. For the first 4 months of 2022, that is the period of 1st January and April 30th the St Christopher Air and Seaports Authority (SCASPA) recorded a profit. Yes, SCASPA was in the black at the end of April this year. For this first quarter, SCASPA’s profit was EC $423,933. This is quite a remarkable achievement for an entity which was so badly bruised by consistent losses over the last  2 years due to the COVID-19.  These are not my personal opinions, these are the facts that can be verified and Ms. Phipps should have known better and in fact, she did know better, but instead, she preferred to lie to the nation.”

The Coronavirus was in 2020 declared a pandemic, as it began to wreak havoc around the world, with high infection and death rates, as well as significantly high unemployment in the private sector businesses. Countries were forced to close their borders, St Kitts- Nevis included. In this regard, Grant said SCASPA had to deal with the financial challenges without assistance from the Federal Government.

“During that period, SCASPA, just like the Federal Government and private companies, had to find ways to mitigate the financial challenges that resulted from the closure of our air and sea ports. Despite these difficult times, not one cent was given to SCASPA from the Federal Government to cover its monthly operating expenses. SCASPA had to fend for itself through prudent cash flow management.”

Looking at some financial data, Grant compared the revenues and expenditures at SCASPA over the past few years.

“Let us keep in mind that SCASPA makes a large block of its money from the visit of cruise ships. For example, for the period January-April this year, the cruise sector provided the Authority with 43% of its revenue.”

Grant questioned, “How, therefore, can Ms. Phipps, a former Executive Director of the Chamber of Commerce, and someone who should have a sharper understanding of business, how could she allow her boss to send her before the microphones to mislead the public?”

The former SCASPA Minister said, despite the tough consequences of the pandemic, SCASPA kept its workers employed and staff allowances were reduced or discontinued. The Management and Board also took a 10% pay cut.  He further stated that the Port employees remained on the job exposing themselves to the possibility of being infected by the Coronavirus, some of whom were infected. Grant suggested that Ms. Phipps should applaud SCASPA for the sacrifices made, instead of “launching attacks not consistent with the truth.”

Grant has also addressed the matter related to a circulating document that allegedly states that SCASPA owes SKELEC in excess of EC$10M. Grant says SCASPA  has been paying its bill consistently since it was established, with the exception of 2020 and 2021.

“SCASPA’s annual electricity bill is just over $1M annually. It means therefore that SCASPA would not have paid SKELEC since it became a Corporation some 10 years ago. This is far from the truth. SCASPA has been paying SKELEC consistently since its establishment except for the two years of the Pandemic. The amount due to SKELEC based on a payment plan that I was privy to, is just over $2m that SCASPA services, monthly. The $10M that is being paraded, relates to disputed billings of more than 20 years and includes amounts coming forward from the days of the Airport, being a Government Department. “

Grant added, “The original amount was over $20m and following a review of the records that was available to SCASPA at the time, a pattern of excessive erroneous billings was demonstrated to the then Electricity Department and $10.7M was removed from the statements over the years 2009-2012. The notes can be found in the audited accounts for those years. The balance that is being circulated was submitted to the Ministry of Finance for resolution and as far as SCASPA is concerned, it has no bearing on SKELEC’s current financial situation.”

Grant addressed other matters raised by Phipps which relates to the subvention of $17.2 Million from the Federal Government. He said the Cabinet approved the subvention to cover three main items and every dollar was accounted for.

“1. $6,974,287M went to the Arbitration in connection with the construction of the second cruise pier under the guidance of former Minister of Ports, Ian Patches Liburd.

2. $3,000,000M went to the Retrofitting of Robert Bradshaw International Airport. The amount for the airport was to ensure that it complied with COVID-19 requirements that were put in place by the Ministry of Health and the COVID-19 Task Force. I should remind you that at the time, the Minister of Health was Wendy Phipps.

3. $6,513,480 was allocated for Fenders and Dredging at the cargo and cruise piers to correct issues that originated during the tenure of former Minister Liburd.”

According to Grant, the remaining $800,000 was a partial contribution towards the payment of the double salary for staff after the last-minute announcement by the Minister of Finance and Prime Minister, Dr. Timothy Harris.

Grant additionally addressed claims of conflict of interest, the employment of new staff and Audit; explaining that under his tenure SCASPA’s books were audited yearly, by external auditors.  He said, all audited reports up until 2020 can be found on SCASPA’s website and the 2021 accounts are currently being audited by independent external auditors.