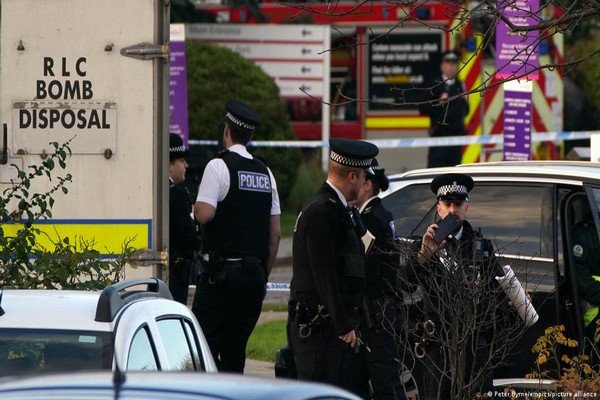 (The Guardian) The explosion outside a hospital in Liverpool that left a man dead and another seriously injured has been declared a terrorist incident, police have said, as an emergency Cobra meeting is set to be held.

Police said that following discussions with bomb disposal officers the force confirmed that the explosion is being treated “as the ignition of an explosive device”.

A taxi burst into flames outside the Liverpool Women’s hospital at 10.59am on Remembrance Sunday in dramatic scenes that were captured on video.

Police later confirmed that a male passenger was declared dead at the scene, while the cab driver, who has been widely named in reports as David Perry, from Kirkdale, managed to escape, and has since been discharged from hospital.

The improvised explosive device had been manufactured and the assumption is that it was built by the deceased passenger, according to early police findings, and while the motive is unclear one line of inquiry is a possible link with remembrance events taking place on Sunday.

The assistant chief constable Russ Jackson from Counter Terrorism North West told a press conference police believed they knew the identity of the passenger but could not confirm at this time.

Three men aged 21, 26 and 29 were arrested on Sunday under the Terrorism Act, while a fourth man aged 20 was arrested on Monday.

Jackson told the press conference that the taxi driver picked up a fare in Rutland Avenue, Liverpool, shortly before 11am on Sunday. The fare, a man, asked to be taken to the Liverpool Women’s hospital, which was about 10 minutes away.

As the taxi approached the drop-off point at the hospital, an explosion occurred from within the car, which quickly engulfed it in flames.

The driver escaped from the cab and was treated for the injuries he sustained and later discharged from hospital.

The prime minister, Boris Johnson, praised the efforts of the taxi driver. He said: “This is an ongoing investigation so I can’t comment on the details or exactly what type of incident it was, what type of crime it may have been. But it does look as though the taxi driver in question did behave with incredible presence of mind and bravery.

“But I’ve got to say this is something that is an ongoing investigation. I think it would be premature to say much more than that.”

The Guardian understands Johnson will chair a Cobra meeting on the attack on Monday afternoon. Cobra is shorthand for the Civil Contingencies Committee, which is convened to handle matters of national emergency or major disruption.

Jackson said inquiries indicated that the device was brought into the cab by the passenger, who was declared dead at the scene.

Keith Ford, 47, a production operative who lives in Sutcliffe Street with his partner and 13-year-old daughter, witnessed the dramatic arrests. “I’d say about an hour and a half later, a man came out of the property that they were pointing the guns at,” he said.

“He came to the front door, police shouted at him, saying ‘hands up in the air’, then he walked to the pub on the end of the corner.”

Ford described the man as having dark hair, dark trousers and a blue T-shirt. He continued: “A couple of hours later, another man came to the door, the police were shouting at him, saying: ‘Hands up in the air, hands up in the air.’”

He understood that the occupants of the property changed around two months ago and had not seen anyone since they moved in.

Ford was told to evacuate his home and spent the night at his parents’ house before returning on Monday morning.

Jan Temple, 61, who lives with her two sons in Sutcliffe Street, was evacuated at 9.30pm on Sunday night. Of the people living in the property, she said: “We very rarely saw anybody coming or going.”

The fourth arrest took place in the Kensington area of the city, police said.

A second address was searched in Rutland Avenue in Sefton Park, where police found “significant items”, Jackson said, adding that further searches would be necessary.

A cordon was in place at this location on Monday and eight families had been evacuated from the area.

Jackson said the motivation behind the incident was unclear. “The reason why he then took [the device] to the Women’s hospital is unknown, as is the reason for its sudden explosion.

“We are of course aware that there were remembrance events just a short distance away from the hospital and that the ignition occurred shortly before 11am.

“We cannot at this time draw any connection with this but it is a line of inquiry we are pursuing.”

WHO chief makes case for 2nd term as Ethiopia criticises him