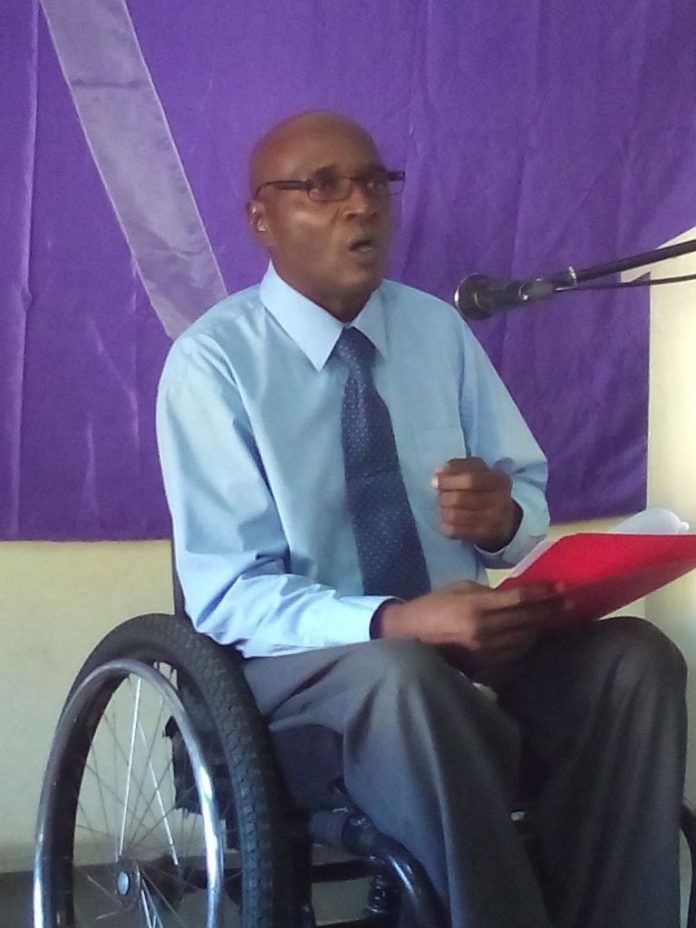 St Kitts and Nevis (WINN): “Nothing about us without us; in other words, you can’t go making decisions that [affect] us if you don’t involve us in the decision-making …We actually are the professionals when it comes to disabilities.”

Tony Mills, former president of the St. Kitts-Nevis Association of persons with Disabilities speaking on the need for consultation and inclusion in decision making, from legislation and policy-making to education and access to basic needs.

Mills was at the time speaking on the WINN weekday show Voices where the topic for discussion was the International Day for Persons with Disabilities observed annually on December 3.

The International Day of Disabled Persons was proclaimed in 1992 by the United Nations General Assembly and aims to promote the rights and well-being of persons with disabilities in all areas of society and development; to increase awareness of the situation of persons with disabilities in every aspect of political, social, economic, and cultural life as described by the United Nations.

Minister in charge of Social Development and Gender Affairs, Eugene Hamilton in his address to commemorate the day said that the government has heard the cries of the St. Kitts-Nevis Association of persons with Disabilities for inclusion and access.

“The St. Kitts Nevis Association of Persons with Disabilities or the SKNAPD continues to fight for the rights of the disabled community through their outreach and awareness programs. The organization has outlined for my ministry the issues that need to be addressed and I would like for members of the organization to know that we have heard your voices and the ministry and the Government of St. Kitts and Nevis is working to resolve these issues. The need for programs that target persons with disabilities, the need for National Health insurance that would help to offset medical bills and, among other things, the need for better physical accessibility to buildings and public spaces, are highest on the list of priorities.”

However, Mills later in the show spoke at length on what access really means to the community of persons living with disabilities.

“Most of the times when you say access people automatically think of physical access, ramps, rails, elevators, and stuff like that, but access really is more than that. There has to be greater access to information because people with some disabilities need … information … to be disseminated in other formats than just print. Like a person who is deaf would need sign language interpretation on the news, because otherwise, they wouldn’t know what is being said as far as a news broadcast on the TV. Or a Minister of Government or Prime Minister having an address on the TV and without sign language interpretation those [people] who need it [do] not have access to that information. So those are some of the things that we see that needs to be done. Our building codes also need to be addressed and be revised, because what happens is that it takes … the goodness of a company or a building owner to put in a ramp… because there’s no standard … nothing in the building codes that say that they must do. In the back of the building codes, there’s an appendix … that speaks to those things but it’s optional.”

Hamilton in his address further touched on access and inclusion on a more international level that would still affect our island federation through commerce and tourism.

“I would therefore like to remind all public and private sector institutions that a differently-abled person is a customer like anyone else. They too need to visit our offices our banks, our supermarkets, stores, churches, restaurants, and our entertainment centers. The organization rightfully noted that the lack of accessibility not only affects our local disabled community but our tourism industry as well. This is because without proper access to facilities, tourists who are themselves differently-abled may have difficulty maneuvering around our beautiful twin-island federation. This could affect their choice of [a] vacation destination, adversely affecting our tourism prospects.”

Further still on a community level Mills gave an example of a lack of inclusion in even building codes, disclosing that in the building codes for the federation the inclusion of access for persons with disabilities is an option in the appendices, with an even more shocking revelation, that even a church showed apprehension in including a ramp to access the sanctuary.

“… If it’s one building I would not allow [anybody] to lift me into is a church because it’s supposed to be the single most accommodating building. Because it’s [supposed] to include everybody. And I find if you don’t make your church inclusive, … this one is just my personal opinion, you not really doing the Lord’s work.”

Conversely, Michelle Jacobs, Student Support Officer within the Ministry of Education who previously worked as a teacher of special education and the sign language translator for the NEOC COVID-19 press briefings focused on the misconception that people living with disabilities cannot function as a member of society.

Mills and Jacobs shared the same sentiment in highlighting the fact that disabilities does not discriminate and can happen at any time to anyone.

“There’s no ethnic group or social group that does not include at least one person with a disability. So you find wherever you look [there are people] with disabilities. We account for like 10 to 15% of the population of St. Kitts and Nevis and about 20% of the world’s population,” Mills said.

“Some persons are born with the disability, yes, depending on the nature of the disability; you can have it from birth. Some persons … get it early in life, midlife, late in life. So a disability can come on at any time,” Jacobs said.