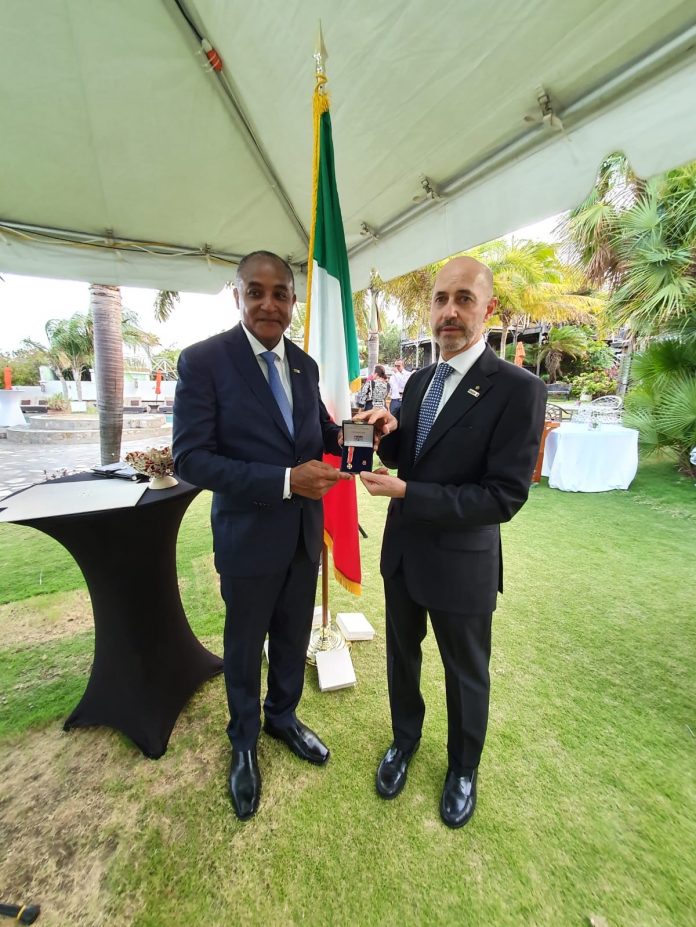 St. Kitts and Nevis (WINN): The Honorary Consul of Italy to St. Kitts and Nevis, Mr. Ernest Amory, was presented with the Order of the Star of Italy during a cocktail to welcome His Excellency Fabrizio Nicoletti, the newly appointed Ambassador of Italy on May 19.

On a week-long visit to the Federation, Ambassador Nicoletti, the newly appointed Ambassador of Italy accredited to St. Kitts and Nevis said that Amory, for the last 20 years, has helped facilitate the relations between the Federation and Italy.

“He is, let’s say, the reason that I decided first to come to St. Kitts to strengthen and underline how important his task, his commitment, the way he did it (serves as Honorary Consul) for two countries, not only for Italy but also for St. Kitts… He did it in such a remarkable way that the Italian President of the Republic decided to grant him Knighthood,” said His Excellency Nicoletti.

Amory, owner and Chairman of Amory Enterprises, said he considers his service as the Honorary Consul of Italy an honour.

“Over the past years, I have had the distinct pleasure, not a responsibility, but an honour, to serve the Republic of Italie. I don’t think serving should ever be a responsibility. It should be an honour, it should be a privilege, and so I have been privileged over the years to serve Italy and the people of Italy; whether they live here, whether they come here on vacation or cruise ships or the hotels.”

The honour of the Order of the Star of Italy is granted by the President of the Republic, His Excellency Sergio Mattarella, on the proposal of the Minister of Foreign Affairs, His Excellency Luigi Di Maio, as a reward for those who have acquired particular merits in promoting friendship and collaboration relations between Italy and other countries and in promoting ties with Italy.

The Order is now divided into five classes:

– Knight of the Grand Cross

During his visit, Ambassador Nicoletti presented his credentials to His Excellency the Governor-General, Sir S. W. Tapley Seaton, on Tuesday, May 17, at Government House.

On Thursday (May 19), Prime Minister the Hon Dr. Timothy Harris also had bilateral discussions with the Ambassador about the blue economy and the ongoing war between Russia and Ukraine, which has compounded the challenge of food security and access to other commodities.