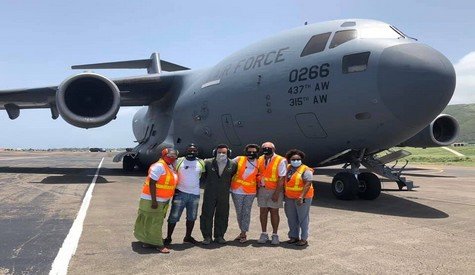 The initiative cooperates with the Ministry of Social Services, Community Development and Gender Affairs, the Ministry of Education and other community groups to identify families in need and supply students with adequate school supplies.

“It was an awesome experience not just because it involved a big and really cool plane carrying stuff to help folks, but what the day represented overall—people coming together to help people,” said ATime4Us Foundation Board Member Connie Jaynes, who coordinated with the U.S. Agency for International Development (USAID) and the Denton Program for receipt of the humanitarian donation.

“This year we had set initially a goal of 750 and we’re increasing that to at least 800 because we recognize that when we set that goal that was kind of pre-COVID and we know families are hurting even more now,” stated Jaynes.

The shipment included 900 backpacks and emergency supplies for primary and secondary students in St. Kitts and Nevis. The distribution of the school supplies will be held in time for the start of the new school year and interested families are encouraged to apply at Social services for receipt of the supplies. Jaynes expressed that she understands the difficulty in asking for help, but providing students with the appropriate necessities for the next school year should be paramount.

The airlift also brought beds, mattresses, and storage units to support the Garden of Rebirth domestic violence shelter for women and children.

“It was an emotional day for all of us who were involved. It was a dream come true,” wrote Garden of Rebirth Founder Etsu Bradshaw-Caines. Bradshaw-Caines made the delineation that the donations brought from the donors of the US based Non-profit organizations were not for distribution but for the shelter’s use. Through the donors in the US bunk beds, mattresses, storage lockers and rollaway storage containers were bought and sent on the US aircraft.

Established in 2015, the Garden of Rebirth domestic violence shelter for women and children is a non-governmental organization (NGO) on St. Kitts and Nevis. The centre is committed to providing a safe and secure haven to shelter and support women and children who are survivors of Gender Based Violence (GBV). The centre offers a wide range of services focused on safety, empowerment, and self-sufficiency. The services include: crisis intervention, legal services, counseling services and career development training. Some of the donations are a part of Operation Band-Aid, another local St. Kitts and Nevis initiative assisting households critically impacted by the economic fallout of COVID-19.

“This initiative represents the best of the United States – individual citizens, the private sector, and the U.S. government and military all coming together to support a friend and neighbor – St. Kitts and Nevis,” said U.S. Ambassador Linda Taglialatela.

The delivery was made possible with the help of the USAID, the U.S. Air Force (Denton Program), and Source Relief, which provided airlift to transport the private U.S. charity donations. The Denton Program has made 3 shipments in less than two years to St. Kitts & Nevis.