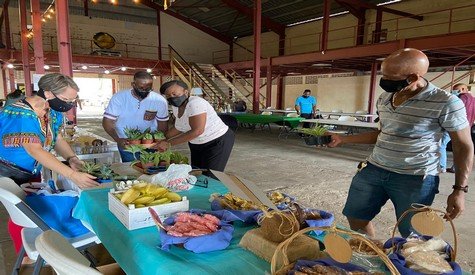 St Kitts and Nevis (WINN): Fresh Finds, a local pop-up market, hosted its first event for local vendors, artisans and entrepreneurs to showcase their products and services on Saturday (September 26) at the former Courts Warehouse, Bay Road, Basseterre. The market provides an avenue for creatives and entrepreneurs in St. Kitts and Nevis to showcase their work, network, and foster relationships and collaborations.

The organizers were local creatives Carèsse Hanley and Klieon John, as well as Hamir Sabnani the General Manager of Rams Trading and Rams Group of Companies.

Sabnani credited the amount of entrepreneurial spirit shown by local residents in the fight to make ends meet during a global pandemic. Seeing that struggle and the success some local entrepreneurs had been having also helped to inspire the creation of the market to showcase the entrepreneurs in one place.

Sabnani reached out to John as a partner in this venture who in turn contacted Hanley and the three worked together to create the central space dubbed Fresh Finds.

Normally pop-ups suggest the possibility of constantly changing venues but they explained that may be the case in the future based on the need and availability of space.

“Fresh Finds… it’s more than just an event, it’s a brand that’s beginning with an event that happens every last Saturday. But… the ideas are going to flourish… as we interact more with our vendors, and patrons and different stakeholders and sponsors and partners we will realize more needs and more opportunities to support the local community. We definitely intend for the brand to be fluid and dynamic in meeting those needs.”

John went on to express that before Fresh Finds, he realized that the amount of locally-based brands in St. Kitts and Nevis cannot be counted easily. However, as a community, we needed to have a space where these brands can be showcased and Fresh Finds intends to help pioneer that endeavor.

Near 40 vendors registered to participate in the pop-up market. Hanley stated that the day before the event, vendors were able to inspect the space and indicate any areas of assistance needed on the day of the pop-up market.

Hanley added that there were quite a number of vendors who were not able to register for the first event; however, those vendors are already signed up for the next event and she is also curious to see what vendors, brands and businesses Fresh Finds will be exposed to at the next event.

“We’ve been getting really good feedback. We’ve been getting great feedback so far on both ends, vendors and customers. We made sure to reach out to persons as well and offer a feedback form just so we could get a bit more in-depth because as a brand, like Klieon said, Fresh Finds, we definitely want it to grow and we want to attract… amazing talent, amazing brands which we know are on the island for a fact.”

Sabnani added, “Klieon had even gotten some feedback on the day. Persons that have been affected or ability to reach their market has been affected due to lockdown measures, lack of tourists on the island. It was really the biggest day for some of those vendors since March in terms of sales.”

John mentions that some of the vendors actually sold out of their products halfway through the pop-up which speaks to the need for such a space in our current economy.

Vendors were also using the pop-up as an opportunity to also support and network with other vendors which truly reflected the aim of Fresh Finds in providing a space for people to shop, share and connect.

Sabnani stated, “We don’t limit to just products. We also have people coming to tell us about what they do and what they can offer to our community.”

Considering the frequently described unprecedented time we are living in; how would a pop-up market work given the protocols in place. John stated when asked if there were any hindrances said, “Most people are quite accustomed now to what the protocols are… we asked persons to make sure they have their masks on. We also asked the vendors to make sure they have sanitizer… we had sanitizer at the entrance to the event… and definitely we’ll make sure that wherever we do pop-up, it’s a space that’s large enough and comfortable enough that person can be safe and still enjoy the space.”

Sabnani concluded by stating, “There’s a lot of small businesses out there that may not have had a platform for sale. We’re now offering a platform for you to show share and sell our products and we’re encouraging people to put more emphasis on brand building and producing quality local product because we’ve set the stage for it and we’re also encouraging the consumers to come out and continue to support local and see that we have a lot of talent here locally [and] we need to support and foster that growth as a community.”

John added that it’s not just about commerce but about fostering good relationships and building a strong creative industry.

The intent is for the Fresh Finds pop-up market to continue at the end of every month. The next pop-up will be on Saturday (October 31, 2020)

The vendors covered a range of industries: Arts and Crafts, Beauty and Cosmetics, Fashions, Creative Services, Food and Beverages, and Performing Arts and Fitness.