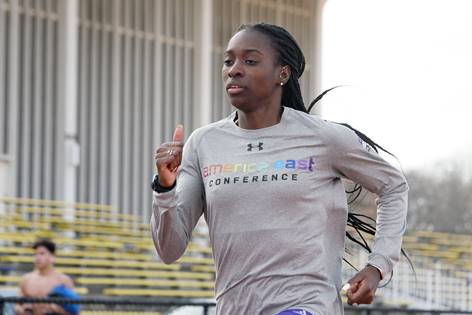 (Press release) Basseterre, St. Kitts: Locally trained professional athlete Grace Claxton has recently qualified for the World Athletics Championships which is slated to take place in Eugene Oregon 15th-24th July 2022. She competed in Spain at the “Meeting Madrid” on June 18th and clocked a personal best time of 55.25 seconds, which earned her a qualifying mark. The qualifying standard is 55.40 seconds.

Claxton is a member of the Fast Twitch Track Club and is trained by World Athletics Level 5 Head Coach Timothy Morton who is “ assisted by coaches Lejourne Crawford and Brian Morris. This is indeed a remarkable achievement for the club. The track club conducts training at the Kim Collins Athletic Stadium.

The Club has had many success stories. Amya Clarke and Jason Rogers who are members of the Fast Twitch Track Club represented the Federation at the 2021 Tokyo Olympic Games. Ian Liburd and Royden Peets placed first and second in the men’s 100m respectively and Tijuanique Morton placed first in the women100m at the recently held SKN Athletics National Championships. In 2019, at the National Championships Hakeem Huggins another Fast Twitch Athlete captured gold in the men’s 100m and also went on to represent the Federation in the 2019 World Athletics Championships. Six athletes in recent times have attained USA athletic scholarships namely Royden Peets, Junior Rouse, Ian Liburd, Tijuanique Morton, Cadence Stanley and Amya Clarke. The club continues to develop and produce world-class athletes. The Club is currently recruiting athletes who are interested in Track and Field.