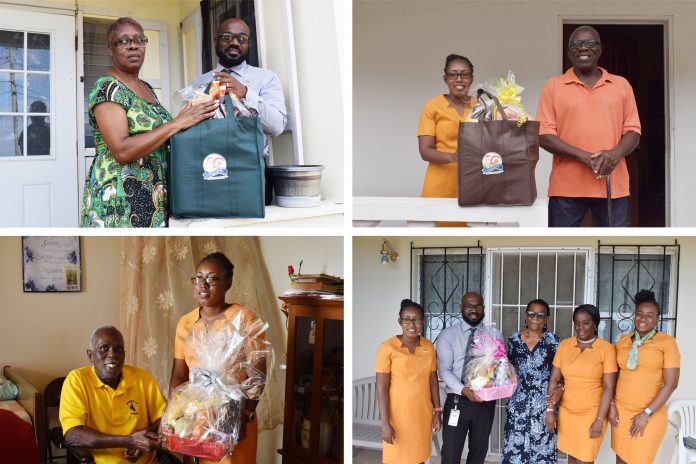 CHARLESTOWN, NEVIS (MMS-SKN) — Active longstanding members of the Nevis Co-operative Credit Union (NCCU) Limited, which is celebrating its 50th anniversary, are giving thanks that their credit union has not only served them well, but it has at the same time contributed to the country’s economic development.

Celebrating under the theme ‘Consistency, Financial Security & Serving the Community – 50 years of Development and Prosperity, the Credit Union which is the oldest in the Federation is doing so by among others giving back to some of its longstanding members through monthly presentation of care packages. It was registered on July 25, 1972.

A Care Packages Sub-committee was put in place and has been tasked with the responsibility of identifying longstanding members who will benefit in each month during the year. For the months January to March, four members received the care packages each month.

“On Thursday, April 21 we presented care packages to five of our longstanding members, a departure from what we did in the first three months where four members were honoured each month,” said one of the two co-ordinators of the Care Packages Sub Committee, Administrative Assistant in the Administration and Human Resource Department, Ms. Tamara Johnson.

“Of these five longstanding members, people who put their trust in the Credit Union during its infancy, two were from Butler’s Village, and the other three were from the Charlestown area, namely Brazier’s Estate, Hamilton Estate, and Bath Village,” said Ms. Johnson. “When they responded to our gesture, one would be excused to think that they were reading from the same script as they each wished their Credit Union a continued and sustainable growth.”

Committee members travelled to Butler’s Village in St. James Parish, where Mr. Kenroy Warner presented a care package to longstanding member, Ms. Benilda Griffin, who told them that it was her mother, former civil servant the late Mrs. Florence Griffin who encouraged her to join the credit union. She noted that “they (credit union) have never treated me badly. They are 100 percent behind their members and they do any and everything they can do to help you.”

While still in the village they moved a few yards down the road to the house of Mr. Ezzard Charles, a longstanding member who said that he had joined the credit union while working in the British Virgin Islands where he had lived for twelve years. He continued being a member when he returned home and started working for the Nevis Island Administration.

On returning to Charlestown, the Care Packages Sub Committee members stopped at Brazier’s Estate where longstanding member Ms. Verna Williams was presented the care package by Ms. Patulia Huggins. On receiving the care package Ms. Williams said that she felt really appreciated by her credit union and wished it well as it serves others.

Retired civil servant Mr. Stephen Jones of Hamilton Estate, who received the care package from Ms. Jahniel Nisbett, lauded the credit union for the contribution it has made to the Federation through loans given to persons undertaking further education, and loans to persons in agriculture.

Having at one time served as a Board Member of the Nevis Co-operative Credit Union Limited’s Credit Committee for six years, Mr. Jones advised the credit union to also consider, for loans, persons studying for their degree programmes through online courses. He noted: “When I was there we used to make sure that we give loans for education a priority.”

Final stop was in Bath Village where the Coordinator of the Care Packages Sub Committee, Ms. Tamara Johnson, presented a care package to Ms. Alphur Jeffers who expressed joy at receiving members of staff of her beloved credit union at her home. She noted that in all her interactions with the credit union she would have been handled with dignity, was proud to be a member, and encouraged others to join.