Macmillan Education Caribbean announces its ‘Summer of Science’, an extensive and engaging programme for both students and educators 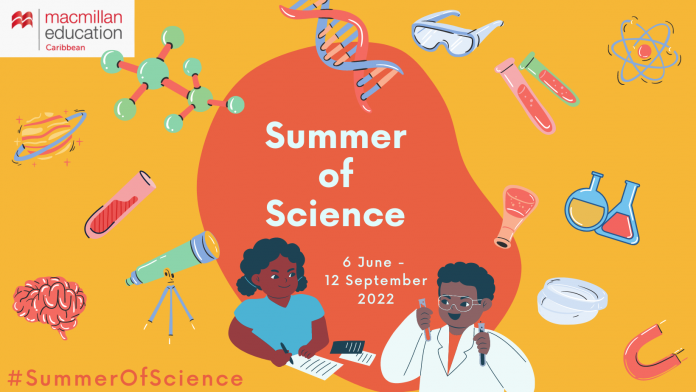 (Press Release) Macmillan Education Caribbean will on Monday launch an extensive Summer of Science campaign, designed to encourage both students and educators to grow their passion and get involved in all kinds of science.

This campaign, which is set to run from June 6 to September 12, will incorporate both social media and several online events.

Spotlighting several of the titles in Macmillan Education Caribbean’s extensive range of science series’, the Summer of Science is a chance for both science educators and the Caribbean’s budding young scientists to develop their skills and reignite their passion for this vital subject.

From fascinating science facts and highlighting the work of Caribbean scientists across social media, to webinars and discussions, the Summer of Science will harness materials from five of their popular science titles to bring this subject to life. The campaign will begin with a two-week social takeover featuring inspiring Caribbean scientists such as Dr Claire Durant from Barbados, in addition to a webinar hosted by Discover Science author Debbie Roberts.

Later events include a panel discussion focusing on women in science, a social media spotlight on the science behind the Caribbean’s incredible agriculture industry, and much more.

With social media playing such an important part in access to information, the Summer of Science brings an element of “infotainment” to educators and students across the Caribbean. Through this extensive and varied campaign, Macmillan Education Caribbean hopes to capture the playful side of science, rejuvenating those in science education as they come to the end of the academic year.

Towards the end of the campaign, Macmillan Education Caribbean will be making a special announcement.

Students and educators are encouraged to follow the Summer of Science across Macmillan Education Caribbean’s social media channels or visit their website for more information.