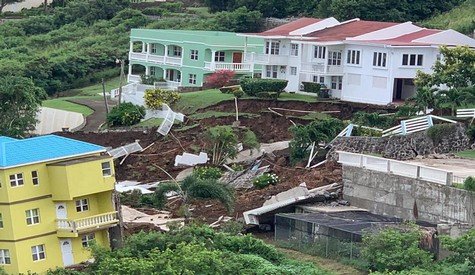 St. Kitts and Nevis (WINN) — A three-story building was left leaning precariously after a major land slippage occurred in the vicinity of Fort Tyson Rise in Frigate Bay on Thursday, November 12, due to continuous heavy rainfall over the past few days, thus, causing the soil to be unsteady.

Officials from the National Emergency Management Agency (NEMA) were present at the scene including their Deputy National Disaster Coordinator, Claricia Langley- Stevens.

WINN caught up with Langley- Stevens who said, “over the last few hours, after the rainy weather, we would have seen some structural damage where Public Works technical staff would have been brought in to conduct an assessment where a homeowner recognized that there were unusual cracks to his residence which is an apartment complex…”

“What we would have witnessed, while on site, is the complete movement of a three-story building towards the ghaut side of Frigate Bay area… We had to do an immediate evacuation of the site and secure the area. All persons were safely evacuated before the major slippage started” stated the Deputy National Disaster Coordinator.

The mitigation council immediately met to discuss ways to secure the hazardous area noted Langley- Stevens adding that NEMA will continue to monitor the site for the next 24 hours in the first instance as heavy rainfall is expected to continue which will result in further saturation of the soil.

Also present at the site were the St. Kitts and Nevis Fire and Rescue Services and officials from the Ministry of Public Infrastructure, as well as residents and on-lookers who gathered to witness the event.