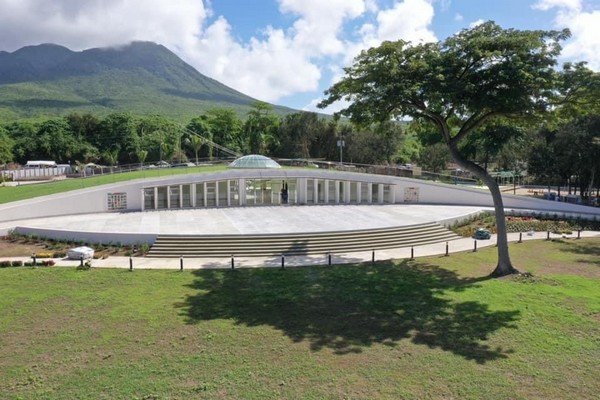 St Kitts and Nevis (WINN): The Malcolm Guishard Recreational Park in Nevis opened at Pinney’s on Sunday 19 December 2021. The park colloquially known as Pinney’s Park, is a collaborative project jointly funded by the Republic of China (Taiwan) and the Nevis Island Administration (NIA).

The park was named after former Nevisian politician and CCM party leader Malcolm Guishard who was first elected to the Federal House in 1993 as the St. Paul’s/St. John’s representative. Guishard died in 2007 at the age of 55

Hon. Mark Brantley, Premier of Nevis posted pictures of the new park on his Facebook page and wrote, “Due to the generosity of the government and people of Taiwan working closely with the NIA, today marks a historic day for Nevis as we officially open the Park at Pinney’s and allow the general public to finally enjoy what we have been working on for the official ceremony and thereafter for movies on the amphitheater lawn and the Taiwanese Trade Show in the visitor center.

This is a dream realized and has been delivered on time and on budget as promised. Praise be to God!”.

The park facility boasts a visitor centre with a turf covered roof, a lawn amphitheatre, a children’s playground, and eight acres of grounds landscaped with approximately 3,000 plants. There is also a Taiwan Expo in St Kitts and Nevis marketplace from 19 to 22 December 2021.

At an inspection tour of the site on September 15, 2020, the Premier expressed his satisfaction with the progress of the park and added, “This park was always intended to be a national project. It was always intended to showcase the relationship between the people of St. Kitts and Nevis and the people of Taiwan, and I think today we are seeing the manifestation of that”.

There are free scheduled Taiwanese movies showing at the amphitheatre, however, on the Taiwan in St. Kitts and Nevis Facebook page, announced today (Monday 20 December 2021) “Today’s first Taiwan Movie Night had to be postponed due to the heavy rain throughout the whole day”. The location of the movie nights have now been relocated to the visitor centre.

Local entrepreneur, Seal My Sip, a smoothie lounge and juice bar announced on their official Facebook page that they will be opening their “next location at the opening of the beautiful Pinney’s Park Nevis”.

The park project which started two years ago, will employ 12 people.

You can watch the ceremony below.