Mandatory Vaccination, Violent Protests and Unrest in the Region 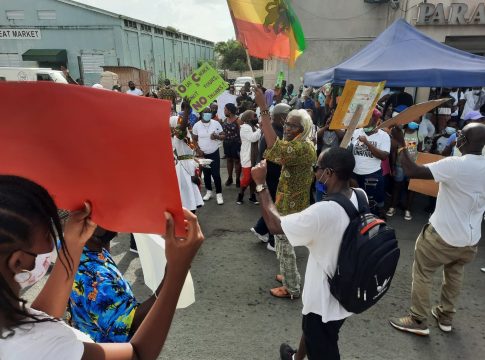 St. Kitts and Nevis (WINN): Across the Caribbean in the past few weeks, persons have expressed strong opinions on the topic of mandatory vaccination in response to the COVID-19 virus.

National discussions have led to protests opposing suggestions of mandatory vaccinations from governments.

Protests in Barbados, Guyana, Antigua and Barbuda, USVI, and St. Vincent and the Grenadines were sparked by the proposition of mandatory vaccinations.

According to Barbados Today, about 2,000 Barbadians and non-nationals held a protest on August 7 designed to, “send a message to authorities that they are strongly against any move to make the COVID-19 vaccines mandatory in Barbados.”

Similarly, in St. Vincent and the Grenadines, outside a Parliamentary sitting on Thursday (August 5), Vincentians protested against the Public Health Amendment Bill 2021, legislation that would mandate federal workers get vaccinated that same day and was reportedly organised by the main opposition New Democratic Party (NDP) and two trade unions.

During the protest action, as Prime Minister Dr Ralph Gonsalves was making his way back to the afternoon session of parliament, he was injured in the head by a projectile. Dr Gonsalves was rushed to hospital and flown to Barbados, where he received an MRI and treatment for a concussion.

Annamay Lewis, 56-year-old, was charged with wounding Dr Gonsalves, and that matter is expected to begin on September 16.

The Public Health Amendment Bill 2021 was passed on Friday, August 6, at about 3 a.m. According to Dr Gonsalves, the bill requires specific categories of employees in the public sector, including those in central government and state enterprises, to take the vaccine to work in specified “frontline” jobs.

Moving over to Antigua and Barbuda.

A statement from the Freedom Fighters of Antigua and Barbuda said, “On August 8, 2021, at 3:00 pm, concerned citizens and nationals of Antigua & Barbuda met to express their frustrations with the current policies of the Government being implemented for the distribution of COVID-19 vaccinations to the population.”

In response to the protest actions, Prime Minister Gaston Browne said, “Why protest against a vaccination you are not required to take…We have made it abundantly clear that no one, absolutely no one in our country, will be vaccinated if they do not wish to be. We uphold that right and respect it.”

The Freedom Fighters said they were expressing concerns about the policies being imposed on the citizens of this country, which are seen to restrict others from one’s right to work, operate their personal affairs, and restrict access to basic needs and wants within Antigua and Barbuda.

Additionally, as recently as Tuesday, August 10 in St. Croix, the Virgin Island Consortium filmed nurses from the Juan F. Luis Hospital who braved poor weather to protest the hospital’s vaccine mandate to have the healthcare workers and employees of the hospital taking the jab or facing termination.

One protester dressed in blue scrubs, who said she was a doctor, was heard in the video saying, “Fire burn vaccine.”

Another protester, a nurse, said she was fighting for autonomy over her own body.

“I’m also in a vaccine reaction group of over 10,000 people, and I am 2000 messages behind with people discussing adverse effects. Mommy was fine. Today she has a blood clot. Mommy was fine. She had myocarditis. There are people with real legit concerns. I listen to the CDC; I’m a nurse, I’m vaccinated. I’ve had vaccines my whole life. I have to be a nurse. The problem is not being anti-vaccine, and it’s very unfair that we’re being labelled as anti-vaxxers. [The] Governor actually used the word anti-Vaxxer… It is impossible for us to be anti-vaccine, but we’re nurses, and we have been vaccinated. The concern is this specific mRNA vaccine. I’ve stated that before, they’re nurses [that are] waiting for a live vaccine, a traditional vaccine, to become available. And if one like that comes available, I’ll be more interested in that one as well. But for us to not want this specific mRNA clinical trial experiment vaccine is beyond me why people don’t understand the hesitancy behind us wanting to wait a little bit.”

The next day (August 11) on St. Thomas, Schneider Regional Medical Center employees and nurses followed suit with their own protest in Charlotte Amalie outside the hospital.

A protester during that demonstration had this to say “I have witnessed our staff nurses over the past year and a half when COVID first came out working their butts off to take care of the Virgin Islands family… I do not think that it is fair that now that you’ve come out with a vaccine that those who don’t want to take the jab are going to be terminated. I don’t think that’s right. It is not right for you to get rid of people who have been loyal to this hospital for years now. The second thing that I’d like to say to the VI community is when they get rid of your local nurses, the people who know you and love you, and they bring in people from up north who don’t know, who are coming here for the dollars; do you think they’re going to take the kind of care for you that are local people have been taking. I don’t think so… No matter how you feel about this issue if you’re willing to compromise the care and the love that we’ve been giving you for years and years now and traded for some people who are just coming here to make loads of dollars… if you’re willing to trade us for them, so be it. I do not think you’re going to receive what we’ve been giving you from these individuals coming from somewhere else,” she said.

At home, protesters were stopped short during a demonstration on Emancipation Day (August 02) in Independence Square protesting against “Segregation through Vaccination”, one placard read.

However, as St. Kitts and Nevis is under a State of Emergency until December 31, protest action must be permitted by the Commissioner of Police. So the peaceful action was stopped by the authorities.

Various headlines since the start of the vaccination rollout have reported about the possibility of passes; travel passes, passes to allow for participation in mass events or even passes to go to the gym. Leading to what some call the segregations of the vaccinated and the unvaccinated. As the move to allow more freedom and preference to the vaccinated continues, people are airing their grievances with such a display of power toward getting more people to accept the vaccine.

Various health authorities including the World Health Organisation (WHO) and the Center for Disease Control and Prevention (CDC) have been calling this the “pandemic for the unvaccinated”.

The reason for such a targeted title stems from reports that state that unvaccinated individuals account for most of the deaths and hospitalizations.

Dr. Rochelle Walensky, the CDC’s director said that unvaccinated people accounted for over 97 percent of hospitalizations.

Thus the introduction of vaccination mandates.

The mandate ranges from federal workers to healthcare workers taking the vaccine or risk unemployment or additional expense by getting tested weekly or bi-weekly, as is the trend in other countries like the US, the United Kingdom, Australia, Canada, and France.

Australia, in late June, made vaccinations mandatory for high-risk aged-care workers and employees in quarantine hotels.

A similar mandate is expected in England for care home workers come October.

According to CBC News, Canada’s Treasury Board Secretariat said on July 20 it was considering whether vaccines should be required for certain roles in the federal government.

At least ten other countries are doing the same.