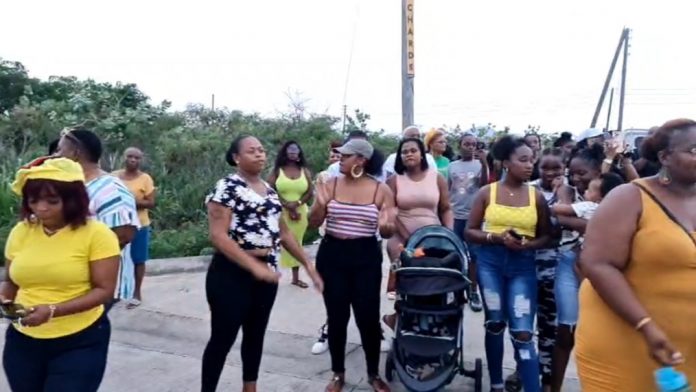 St. Kitts and Nevis (WINN): Several residents have expressed strong opinions online and in the streets in reaction to an ongoing homicide investigation.

Initial reports allege that the young woman accused of committing the homicide was acting in self defence. The Royal St. Christopher and Nevis Police Force is yet to offer any preliminary information on the status of the investigation despite increased community dialogue on the matter.

Reports suggest that the woman had been in an abusive relationship with a man and had made reports to the police.

A widely circulated video of an incident at a residence showed a man, the alleged victim, sharing the details of a confrontation with police who came to the scene. This video was reportedly released following the homicide. In the video, the woman can be heard making repeated pleas for the man to leave her residence, and verbally accusing him of physical abuse.

Some residents of St. Kitts and Nevis have taken to social media with their opinions on the viral video. A myriad of commenters questioned the competency of local police in responding to reports of domestic abuse; with some people stating that the woman’s cry for help was overlooked or that she was failed by the police.

In reaction to the video and the woman’s arrest, a crowd of people participated in a Domestic Violence Abuse March on Monday afternoon (September 19).

From the holding cell at the Sandy Point Police Station, the woman confirmed that she heard the support when she responded to her daughter’s calls and words of inspiration, “Mommy stay strong. I love you”.

President of the St. Kitts Women National Council was also on the scene of the march and made an appeal for justice for the woman. She also encouraged women to speak up and not be silenced.

“It’s an unfortunate situation and we continue to ask the same questions, “How many more will suffer? How many more will die? How many more? How many more before the justice system can change? How many more you may ask? We don’t know. What is the justice system planning to do about it?” We can’t do anything about it but let the law take its course, but what we want is justice. We want justice. It was an act of self defence. She defended herself. We may ask, who is listening? Who is asking the questions?” Women need to stand up. We need to stand out. Our voices need to be heard. Who is listening? Are we listening but we are quiet? Are we listening but are we waiting for the person to make the first step? What are we doing as women? How are we representing our women? The voices, we need to hear them. Silence no more women. Silence no more. We are asking for your voices to be heard.”

Attorney at Law and Legal Council to the St. Kitts Women National Council Ms. Talibah Byron said she too is very disturbed by the situation and is willing to do her part in the fight against domestic abuse.

“I am very, very, very sorry as all of us are, that it has come to this; that we are all here after a life has been lost in this way. We are all here after the police have had opportunity after opportunity after opportunity to intervene and to let it not come to this. Now, I can tell you that even when women who are victims have a lawyer, it’s still very, very difficult sometimes for them to get their abusers arrested. I’m here, I wanted to be a part of the change to that.”

Superintendent Lyndon David of the Royal St. Christopher and Nevis Police Force and Commander for District B was also present at the Sandy Point Police Station at the time of the march. Though he did not specifically address the matter due to ongoing investigation, he too made an appeal for anyone experiencing abuse.

David stated, “We understand that you’re gathered here this afternoon regarding a matter which we’re currently investigating. I cannot venture off into that matter but what we can say to you is the police welcome your concerns regarding domestic violence and as we want to do, we want to end it now. What we would like to say to you is, that whenever you are experiencing domestic violence, you need to say something to someone; whether it is the police, a family member or a friend, or even a concerned citizen. Let them help you to overcome. We understand that, especially when it comes to females, sometimes it is a bit challenging to remove oneself from a partner, whether it is a husband or a boyfriend or a common law husband so to speak; but what we’re saying to you- you need to be strong and cause it to stop because your children they too would go through that process, especially when there’s a loss of life. So they will go through the process of mourning, and all that comes after is trauma. We do not know how much impact it would be and how long it would last, but we are pleased that you are here today to express your concern regarding domestic violence and to encourage young ladies and young men to speak out against it and report it whenever it happens.”