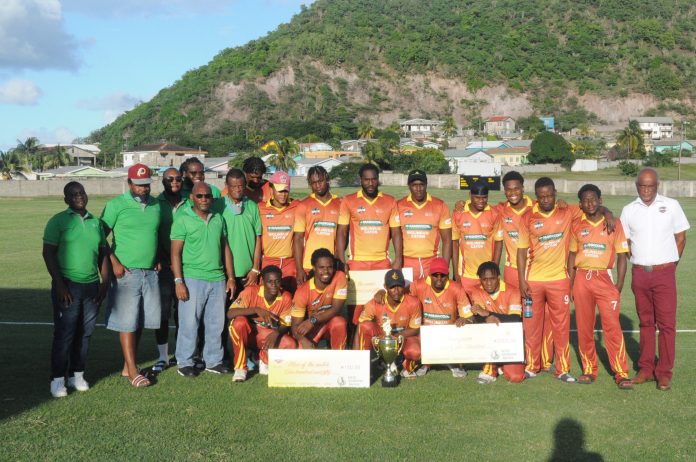 Molineaux/Cayon Cricket Club (MCCC) are back to back Keeth Arthurton T20 Champions after a six-wicket win over Sandy Point on Sunday at the Conaree Cricket Center.

MCCC won the toss and invited Sandy Point to have the first knock. The opening pair for Sandy Point Dillin Liddie and Greg Stanley got their innings off to a lively start taking 25 from three overs, but when Liddie fell after trying one shot too many fell for 12.

Stanley and Akeem Saunders tried to get the innings back on track but after a partnership of nine Stanley was bowled by MCCC Captain Larry Audain for 18.

Saunders was then joined by Terrance Warde, but the experienced pair found it difficult to find scoring options early on.  Especially to Leon Clarke playing his final game for Molineaux/Cayon.

Clarke Bowl his four-over for just 12 runs and got the important wicket of Saunders.

However, Warde kept the Sandy Point innings alive playing an important knock of 49 not from 42 balls as he was patient during the difficult periods and stroke some lusty blows later on as he pushed his team to 115 for 5 from their 20 overs.

Needing 116 for victory, Molineaux/Cayon got off to the worst possible start losing opener Leroy Maynard to the second ball of the innings for two and Christanja Carey and Jaeel Clarke found it difficult to put the ball away in the early overs of the power play.

When Jaeel smacked Elvin Berridge for 14 runs in his first over the tide started to swing in favour of MCCC.

Jaeel, who was the leading run-scorer in the competition smacked 29 from 25 balls and to help lay a foundation with Carey following the early wicket. When he was dismissed Sandy Point knew that wickets were their early route back into the game and when for aggressive field placings to Audain and Carey.

However, Carey found his stride and took a liking to Warde’s bowling smashing him for three massive sixes and a four en route to 39 from 43 balls. He however was caught looking to end the game quickly.

Captain Audain and the experience Jacques Taylor saw the game home in the 18th over with Audain finishing not out on 28.

MCCC finished the tournament undefeated and also walked away with the $2500 cash prize. While Sandy had to settle for $1500.

Larry Audain following the game told the audience that he was pleased with his team’s performance throughout the tournament.

“I think we played some good cricket throughout the tournament and to do it undefeated I think it was a great achievement for our young squad.”

He also explained that the team was confident going into the finals to beat a strong Sandy Point side stacked with first-class cricketers.

“We were confident heading into this match, playing collectively as a team I think we stood a better chance. Yes, they have three first-class players, but we would always back ourselves to come out trumps.”