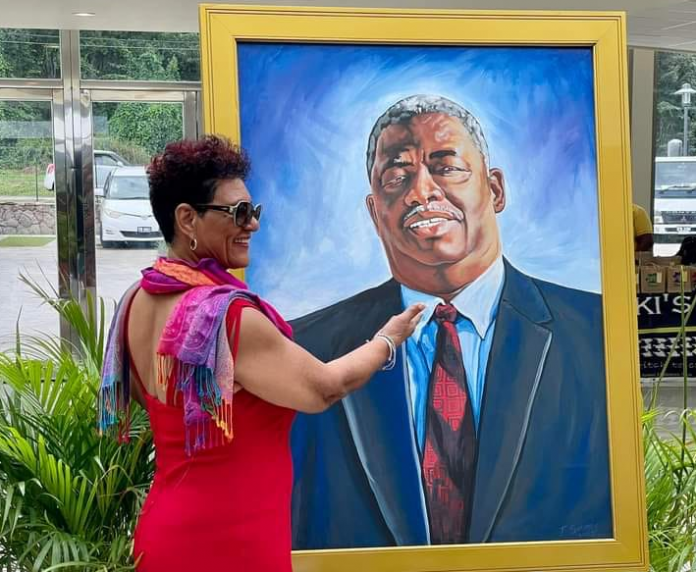 St. Kitts and Nevis (WINN): The Nevis Island Administration and the people of Nevis hosted a ceremony to mark the birthday of Hon. Malcolm Guishard and the first anniversary of the opening of the Malcolm Guishard Recreational Park on Monday morning, January 16, 2023.

The main highlight of the ceremony was the unveiling of a portrait of the late Malcolm Earl Guishard, a former Parliamentarian in the Nevis Island Administration and former Deputy Premier of Nevis. Mrs. Yvonne Guishard, his widow, unveiled the portrait. The painting which was done by Mr. Jimmy Simmons is located in the halls of the facility.

In attendance at the ceremony were the Deputy Governor General, Mrs. Hyleta Liburd, the Cabinet of Ministers, His Excellency Michael Lin, Ambassador of the Republic of China (Taiwan) to St. Kitts-Nevis, family members of the late Malcolm Guishard, school students and other individuals and groups from various cross sections of society.

The first anniversary celebration of the Park also included a cultural presentation, remarks from Ambassador Michael Lin and Premier Brantley and the MGR Park first year overview by the Permanent Secretary in the Ministry of Tourism- Mr. John Hanley. The opening of the Taiwan Nevis Expo which runs for two days also formed part of the anniversary celebration. The Expo welcomed individuals to showcase their artwork and other locally made products.

The Malcolm Guishard Recreational Park is a multi-million dollar edifice which was officially opened in a ceremony on December 19, 2021. The idea of the park was the vision and foresight of Guishard whilst he was Minister of Tourism over 20 years ago. The facility was also made possible through funding from the Government and people of Taiwan.

There have been more than 40, 000 visitors and over 200 events held at the Park since its inception. The facility, which is located at the main entrance to Pinney’s Beach is popularly used by visitors and tourists alike.