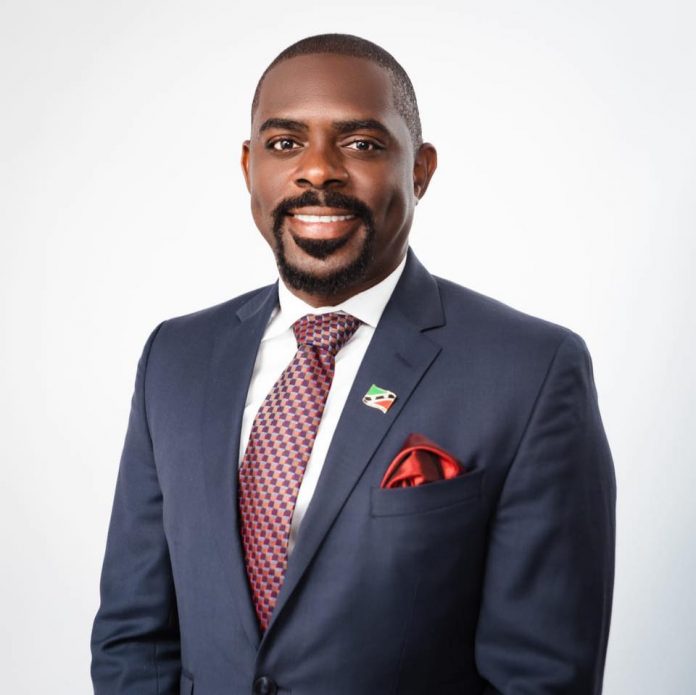 (Press release) Addressing the UNESCO Ministerial World Culture Conference in Mexico, the Honourable Samal Duggins, St. Kitts and Nevis Minister of Creative Economy (Culture), in his first international speaking deployment since taking office, evoked his vision for the Federation as it moves expeditiously towards a new cultural and creative industries model. This combines innovation networks, creative clusters and digital transformation that have the potential to transform the twin-island Federation into a compelling sustainable future hub of creative and cultural activities.

Speaking before an audience of 152 global cultural ministers at the MONDIACULT conference held in Mexico City, and opened by H.E Andrés Manuel López Obrador, President of the United Mexican States, and Madame Azoulay, Director-General of UNESCO, Minister Duggins spelled-out the virtues and challenges in forging a sustainable future for the country’s creative and cultural economy as being, “so critical to the prosperity of a small island developing state”.

“My Ministry has embarked on an ambitious policy to galvanise, cultivate and preserve the creative and cultural industry in St. Kitts and Nevis, based on work in which original ideas are important, such as work in the arts or the media, drama, film-making, music and dancing”, he stated. He underscored the special importance of the creative and cultural industries, linked to indigenous cultural talents, that can deliver, “significant economic potential, and drive innovation and value-creation, employing our citizens, especially including youth and women”. Minister Duggins added that for the new Government, under Hon. Prime Minister Terrance

Noted the Federation’s resident Ambassador to UNESCO in Paris, H.E. David Doyle, “Securing a speaking role for Minister Duggins at this high-level ministerial conference was a singular honour for St. Kitts and Nevis. It also offered a once-in-a-lifetime opportunity for the Minister to articulate the virtues and distinct small island challenges we face in developing a solid creative and cultural, entrepreneurship-led environment”

Among them are shortages of financing sources, shortages of skilled personnel, low levels of training, weak marketing and branding. However, he noted, “There are potential cross-promotional linkages between creative and cultural industries and tourism through festival-tourism, a prominent feature across the Caribbean region. But these are at embryonic stages of development”.

In concluding, Minster Duggins called for scaled-up technical assistance from UNESCO and other international partners in helping to develop a “distinctive small island creative and cultural entrepreneurial policy framework”. Specifically, the Minister urged assistance to build capacities through education and training in the arts, arts administration, continuing heritage management and cultural entrepreneurship. This, he suggested, could be leveraged by also “deploying high-level UNESCO experts at regional and local levels to improve institutional capacity for advocacy, marketing, promotion of cultural products and services”

Commenting afterwards on his statement to the culture ministers at MONDIACULT, Minister Duggins stated, “As St. Kitts and Nevis, along with its neighbouring Caribbean states, diversifies beyond the Blue Economy of tourism and fisheries, we need leading-edge technical assistance in helping us to develop a solid model of how creative industries, innovation networks, creative clusters and digital transformation can give our small islands the foundations for a strong sustainable future.”

The new culture minister of St. Kitts and Nevis commended UNESCO, a specialised UN agency covering education, culture, science and information, for its strategic priority in emphasizing the community cohesive role of creative and cultural industries and in encouraging intercultural dialogue and promoting mutual understanding. “This latter attribute is important for small island developing states in the Caribbean, as we seek to re-integrate young men, back into society through their creative talents with contributions in local communities and society at large”.

Drawing culture ministers from across the globe, this ministerial conference was held 24 years after the UNESCO World Conference on Cultural Policies for Development held in Stockholm (Sweden) in 1998.

UNESCO ranks cultural heritage protection and policy development as one of its core mandates. More recent UNESCO initiatives include improving the status of artistes, the creation of an enabling environment for sustainable development and adaptation of cultural policies to meet the opportunities and challenges presented by the digital transformation of the economy. Improving data collection on the social and economic scale is a priority, in so far as it impacts national cultural and creative entrepreneurship.