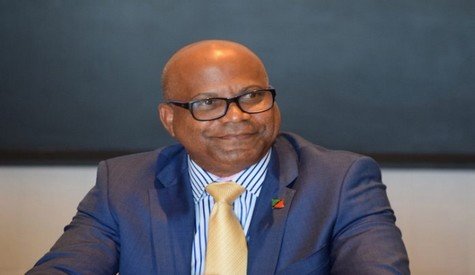 St. Kitts and Nevis (WINN): Representative for Constituency No. 4, the Hon. Lindsay Grant said that phase two of the Old Road Fisheries would soon commence.

“I have done phase one of the fishing complex in Old Road. Phase two of Old ROad is coming.”

Grant made those remarks during a Town Hall Meeting in Constituency 4 on March 28 at 7 p.m.

The breakwater pier at Old Road Bay in Old Road is expected to feature a marina for the fisherfolk of Old Road.

“Phase two would involve basically a marina type development in Old Road, and we intend to put down the necessary structures so that the fisherfolks in Old Road would be able to basically gas up their boat, etc. to move from there to do their fishing,” said Grant.

“As you would recognise, Old Road is a premier fishing community, and we want to get that organised.”

The Minister offered his apologies as it relates to addressing a concern of the fisherfolk of Old Road.

“There is an issue there with regard to ice at the fisheries. The lack of ice has been an issue that [has been] plaguing the community for, I believe, almost two years now.”

The parts required to repair the freezer for the ice have been identified and a plan communicated to the financial secretary, according to Grant; however, there is some struggle with getting the funds necessary allocated.

“That equipment came from, I think, the Japanese; the parts are only available in Japan. I spoke to Mark Williams, who is the head of that area in terms of fisheries, who said to me that when they sourced the part in Japan, where they can only source it, they got an invoice. When they presented it to the financial secretary and the office, I am advised that they were told to get two quotes, and they indicated to that office that they can’t get two quotes… and she’s persisted on that, the office persisted on that.”

He continued, calling for the finance department to approve the purchase of the necessary part.

“Approve it and let Mark Williams or whomsoever bring in the parts so the fisherfolks in Old Road can get the ice for their fish; it is as simple as that.”

The new Old Road Bay road has been asphalted, the breakwater has been completed, and recently fixtures are being installed along the road (road signs, lighting, etc.).

An official date for completing phase two of the fisheries and the final touches for Old Road Bay road has not been given.

Grant also alluded to entrepreneurial opportunities for the people of Old Road with new developments in the works.

The Representative for #4 also said plans are in the works for housing in Lamberts and the start of the road work in the Stone Fort Heights area next week.