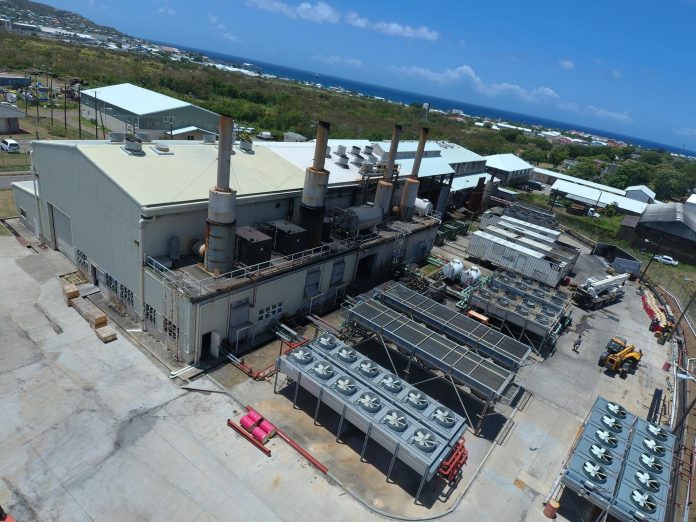 St. Kitts and Nevis (WINN): Following a near islandwide blackout at the end of August at the St. Kitts Electricity Company’s (SKELEC) Needsmust Power Station, the citizens and residents of St. Kitts are on a load shedding schedule which started on September 5.

Minister of Energy and Public Utilities, the Hon. Konris Maynard, in a statement, said that while the power station should have the capacity to produce 48.9 MW of power, which would meet the needs of the Island’s peak power demand of about 26 MW, over the past couple of months, SKELEC has been operating with only enough functioning capacity to narrowly meet the need.

In August of 2022, SKELEC had a maximum available capacity of around 27.8 MW which is just slightly above the island’s peak power demand.

The Minister further explained that “over the weekend, a 15-year-old 3.9 MW capacity generator went out of service due to a fault which can take up to three (3) months to repair. Also, over the weekend, additional faults developed on some of the standby generators. To compound the issue further, at present, SKELEC is awaiting a replacement part for a 23-year-old 6.1 MW generator with an estimated time for completion of repairs of at least four (4) months. SKELEC also still has within its fleet a 35-year-old generator with a nameplate capacity of 3.5 MW that is presently out of service for maintenance. As a result, SKELEC is now operating at only 50 percent capacity.”

General Manager of SKELEC Clement Williams explained in further detail during the September 7 broadcast of  SKELEC PowerTalk on ZIZ.

“With the failure that occurred last Saturday on one of our generators, we had no choice but to start a load shedding exercise because our capacity had been reduced significantly below what our average demand is. Now the average demand for the island of St. Kitts right now is about 25 to 26 megawatts. After the failure on Saturday, we went down to as low as 20 megawatts of available capacity. Now, this is about 50 percent of the weighted capacity of the plant, and you can see [that] 20 is less than 25. So, therefore, we have to shed five megawatts of energy.”

The Minister shared that the following were presented to Cabinet as short-term solutions:

Regarding the repairs and the replacements of generators, SKELEC is optimistic that the remaining load shedding exercises will end within a month.

Williams provided an update on some of the repairs that have been made since the load shedding began.

“So on Monday afternoon, they were able to replace a radiator. This was able to get an additional one megawatt on the system. So by the Tuesday load shedding, we did not have to shed load for as long, or we didn’t have to shed load on such a wide scale as we did say on Monday. Then on Tuesday afternoon, they were able to get another generator online. So that is why today, Wednesday, we were able to start the load shedding at a lot later period than we did on the previous two days because on Monday, we got one of the standby generators back, and on Tuesday, we got two more of the standby generators back on Tuesday. So that is why today we should not have to do a wide area, and as you can see, the schedules are a little bit more condensed.”

The General Manager confirmed that approval was given, on August 7, for purchasing two new containerised generators (temporary standby units not meant for 24/7 operations). As such, the initial month-long exercise may be shortened. Williams shared that they are hoping the shipment of the generators will arrive on Monday, but that is subject to change.

“The guys, however, at the powerplant are already making the preparations to receive those generators. So as soon as they receive, I think we only need maybe a day, day and a half to do the exchange and interconnection to have those two generators in the system. That would be an additional three megawatts, and currently, we are at about 25, which will then take our available capacity to 28 megawatts. Once we get to 28 megawatts, we don’t see a need for load shedding. But that is just a temporary fix, that is just to get us from load shedding generally.”

What is next as it relates to energy security in the Federation?

Minister Maynard stated that he intends to present a comprehensive report on the overall state of affairs of SKELEC and Energy in the Federation.

SKELEC’s General Manager shared that the company is working on creating a more secure energy supply on St. Kitts by sourcing larger capacity generators while increasing investment in renewable forms of energy available to us on St. Kitts and Nevis.

“One of the things I will say is St. Kitts is very blessed. We have solar, we have wind, and luckily we have geothermal. So our energy mix is very diverse, and with the possible interconnection of Nevis, we can be in a position where Nevis can supply St. Kitts, St. Kitts can supply Nevis, and we’re in a position, long term, to meet the entire demand of both St. Kitts and Nevis. Now we had some recent purchases of generators on Nevis (NEVLEC), and similarly, we are going to be the same thing here in St. Kitts; that will take care of our base load. On top of that, we have solar, we have wind, and we have geothermal, which have the potential to meet the demand of the two islands 100 percent, and then we will still have a reliable fleet of generators on the back burner in the event any of the renewable technologies fail for whatever reason, then we’re able to just jump-start the generators and provide a steady and reliable supply to the people of St. Kitts and Nevis.”

The time frame for introducing a steady renewable energy supply in the Federation is three to five years. Williams shared that the Leclanche Solar and Battery Storage Farm should be operationalised shortly. The farm had its kick-off on June 15 and is expected to provide 30-35 percent of St. Kitts’ energy for the next 20 to 25 years.

The Government and SKELEC are also in discussions with potential Wind Farm developers for a possible Wind Farm in the Bellvue area.

As it relates to the geothermal development on Nevis, the target is 2025-26 to come online.

Corporate Communications Manager of SKELEC Patrice Harris appealed to the General public reminding them that the situation is a dynamic one and, as such, may change on short notice.

“One of the things that we want the public to understand is that this is a very dynamic situation. As you would have stated, from Saturday until now, we have seen some improvements, and some changes would have already started to occur as it relates to the load shedding exercise. The public is asked to be patient and to recognise that this is a very unfortunate situation that none of us would want to be in; it’s certainly not intentional. I know a lot of those types of comments are being made in the public about SKELEC sabotaging and so forth. We do have a trained cadre of professionals. At SKELEC, our technicians, our maintenance team, our operations team, who are literally working vociferously   around the clock in order to be able to pull us out of the situation.”