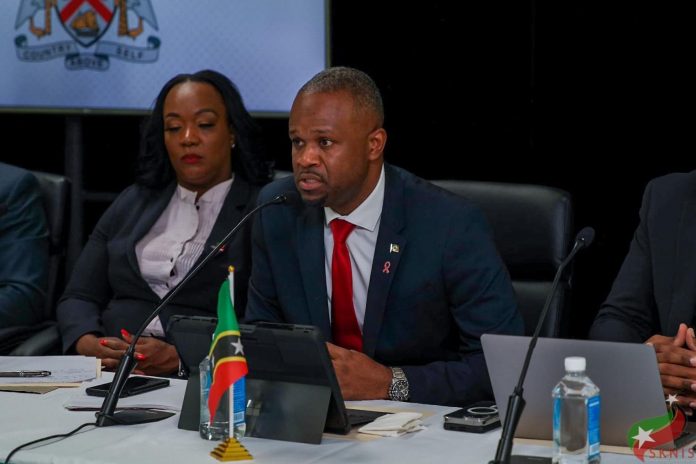 St. Kitts and Nevis (WINN): The Federation is now in the transitory phase of moving from total dependence on fossil fuels to exploring the different mixes of renewable energy, according to The Honourable Konris Maynard, Minister of Energy, in an update on the future of renewable energy during the Prime Minister’s Press conference on October 17.

The Energy Minister imagines the Federation as a beacon in the northern Caribbean region, providing energy for the entire Eastern Caribbean.

“We are very pleased to be partnering in our thrust to bring a renewable energy sector to St. Kitts and Nevis, and that includes exploring the vast possibilities with geothermal. I have had at least two meeting with the official at NEVLEC, and we are now at the point where there is going to be test wells effectively being done to ascertain the viability of the geothermal reservoir that is there.”

The Energy Minister continued, “at this point, the thinking is that Nevis’ geothermal wells will have enough energy in the first instance to support not only Nevis but Nevis and St. Kitts. And so, they are collaborating with SKELEC on how we are going to integrate both grids such that we now create one grid for the Federation of St. Kitts and Nevis.”

Maynard said the aim is to have all renewable energy sources in the Federation supply energy to both islands, creating one grid.

“When power is generated in Nevis, it can reach as far as St. Paul’s in St. Kitts. Similarly, if St. Kitts generates power from solar or wind in St. Kitts, it can reach Gingerland in Nevis, and we create one unified grid. But we should not stop there. There are vast possibilities. If it is that this initial exploration goes as is expected, the probability of success is in the 90 percentile. Then we have to look at the real option of going further, using St. Kitts as a point to connect to other islands such as St. Maarten, St. Eustatius, Anguilla, even as far as Peurto Rico and using Nevis to connect to other islands such as Montserrat and Antigua.”

“We have everything now at our doorsteps, including the resources, people who are ready to invest, but more importantly, the political will to collaborate in a unified way.”