Minister of Environment: “The time for action is NOW!” 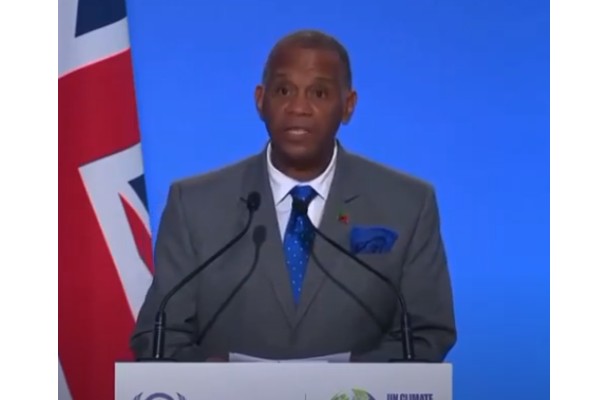 World leaders continue to make suggestions in support of immediate action against the rising temperatures and sea levels globally.

The increase in carbon emissions has led to drastic changes in weather patterns and systems worldwide, especially in the Caribbean. For the second year in a row, the Atlantic Hurricane season started earlier and has had an above-average storm activity.

In a national statement during the COP26 high-level segment, the Hon. Eric Evelyn, Minister of Environment and Co-operatives, said the time for action is now.

“We are here at a time when the entire world is languishing from the horrors of climate change, including sea-level rise, extreme weather events, and dramatic changes in rainfall patterns. We are here at a time when coastal towns and villages and even entire islands face destruction; at a time when lives and livelihoods are at stake, all undoubtedly attributed to human interference. Yet, enough action is not being taken to remedy this situation that worsens with every second that the clock ticks.”

The minister addressed a recently launched program to reduce greenhouse gas emissions within our island Federation by 61 percent in under ten years.

“Climate change is real, and St. Kitts and Nevis has launched during COP26 a more significantly ambitious Revised Nationally Determined Contributions (NDC) proposing to reduce emissions by 61 percent by 2030 compared to 2010 levels,” said Evelyn citing that the Caribbean and other Small Island Developing States (SIDS) and lesser developed countries (LDC) account for 7percent of global GreenHouse Gas emissions yet we suffer most from the overall effects.

“Yet we are deprived of much-needed climate finance for loss and damage, mitigation and adaptation efforts. This, Mr President, is unacceptable, and it has to change. Developed countries and large emitters must recognise the need to improve access to finance, scale-up climate finance and make finance flows consistent with the Paris Agreement. We need climate justice.”

As part of the plan, SKN will invest in renewable energy with plans for a 35-megawatt solar farm expected in two years. Evelyn said we are committed to continuing the aggressive pursuit of geothermal power.

You can listen to the Minister’s full address here:

“Currently, St. Kitts and Nevis is preparing its third national communication and first bi-annual update report. The preparation of our greenhouse gas inventory is being supported by the Caribbean Corporative Measurement Reporting and Verification HUB, local experts and officials to ensure that robust data sets are sourced and used to calculate greenhouse gas emission estimates. This comprehensive data collection efforts allow for revisions of previous estimates in relevant sectors, for example, waste, as well as prioritise action tasks in the forestry and other land sectors to better understand the levels of sinks and potential emissions.”