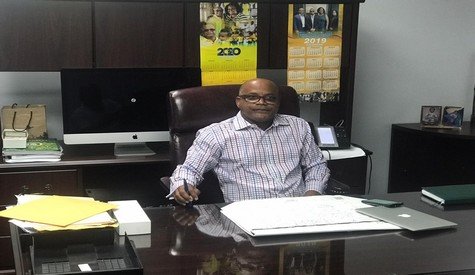 St Kitts and Nevis (WINN) Minister of Tourism, Lindsay Grant, during a press conference on Tuesday (August 25) at the Ministry of Tourism offices, addressed the ship currently anchored in the Basseterre habour, the AIDA Luna.

“The AIDA Luna is presently in the Basseterre roadstead. The reason for it being there is that they put out a distress call to SCASPA because they were suffering mechanical problems from a propeller shaft and the bearings in it…”

Grant added that under the International Maritime Organization rules we were obliged to at least help them as they were in distress and thus they were allowed anchorage at the furthest approved point in the Basseterre harbor.

The AIDA Luna is one of nine brands under the Carnival Cooperation brand. Minister Grant added that because of the relationship between the federation and Carnival Cooperation the distress call was answered and the ship containing 103 crew members was allowed anchorage at the furthest point in the Basseterre habour to conduct emergency repairs.
Grant assured that none of the crew will be allowed to come ashore, and no one will be allowed to go onboard the vessel.

However, considering the current rate at which we are accepting ships within the waters of the federation, the interaction between the citizens of St. Kitts and Nevis and these ship dwellers need addressing. In an instance where a ship requests mechanical assistance from SCASPA, what are the protocols in place for such an interaction?

Grant mentioned at the present time the current protocols will not allow any of our citizens to face such risk and board outside vessels.

“Well, as far as we are concerned in terms of the protocols we are not going to put our people at risk. We will no embark on any ship… Obviously it’s a case by case matter but as far as we are concerned and the health officials are concerned we are ensuring that there’s no contact between nationals of St. Kitts and Nevis who are on land and any ship that comes into port…That’s the reason why nobody is going to board the AIDA and likewise nobody is expected to disembark the Aida, all the protocols are being followed.”

Grant was also asked to address the status of the two Royal Cruise Line ships that were expected the week of August 17, the Rhapsody of the Seas and Vision of the Seas, which were delayed.

“The health officials became aware of some added information from the ship and so because of that the health officials wanted to analyze the risk factor bearing in mind the new information that they have received. So they are in the process of determining… the status of the risk of that ship before we allow them to enter the territorial waters of St. Kitts and Nevis.”

Grant went on to add that the risk assessment applies to both ships as the government wants to make sure the health and safety of its nationals is paramount.

“Once we get the green light from the health officials and from the cabinet they will come to St. Kitts and Nevis.”

The Rhapsody of the Seas is still slated to arrive earlier than the Vision of the Seas which would arrive a few days later according to Grant.